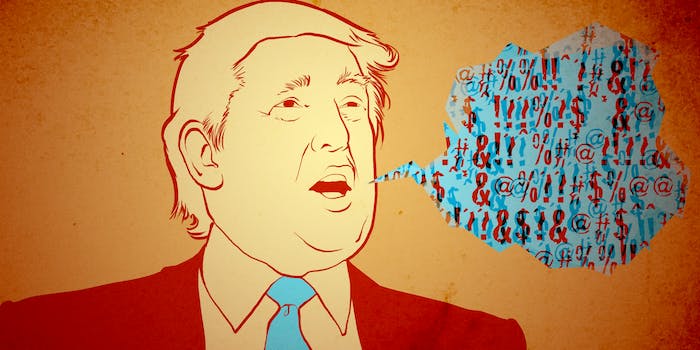 The site Women Can Stop Trump is on a mission to do just that.

Want to give your friends proof that Donald Trump has said some really terrible things about women, but don’t know where to look? You’re in luck! Women Can Stop Trump has handily organized every terrible thing the Republican presidential nominee has said about women all in one place.

Well, they’ve got the hits at least. There’s him saying, “putting a wife to work is a very dangerous thing.” There’s him telling Celebrity Apprentice contestant Brande Roderick she’d look pretty on her knees. There’s him talking about how there should be “some sort of punishment” for women who have abortions. And of course him bragging about his daughter Ivanka’s smokin’ hot bod.

However, there’s plenty more than what’s on the site, given how long Trump has been in the public eye.

There’s when he assumed there’s sexual assault in the military because women exist there.

26,000 unreported sexual assults in the military-only 238 convictions. What did these geniuses expect when they put men & women together?

Then there’s the time he fantasized about what his daughter Tiffany Trump’s breasts would grow to look like.

There’s also the time he allegedly said of his then-wife Ivana, “I would never buy Ivana any decent jewels or pictures. Why give her negotiable assets?”

And the time he wrote the following about prenups in The Art of the Comeback:

There are basically three types of women and reactions. One is the good woman who very much loves her future husband, solely for himself, but refuses to sign the agreement on principle. I fully understand this, but the man should take a pass anyway and find someone else. The other is the calculating woman who refuses to sign the prenuptial agreement because she is expecting to take advantage of the poor, unsuspecting sucker she’s got in her grasp. There is also the woman who will openly and quickly sign a prenuptial agreement in order to make a quick hit and take the money given to her.

Wait, there’s more! There’s pageant contestant Carrie Prejean, who wrote about the “Trump Rule” in the Miss USA pageant, the rule being that the contestants had to walk in front of him so he could figure out who he found sexually appealing, personally.

Oh, and there’s the time in 1999 when he promised to (hypothetically) stock the White House with supermodels and said, “Certain guys tell me they want women of substance, not beautiful models. It just means they can’t get beautiful models.”

Of course, Donald Trump denies all this, and can’t believe anyone would believe he would be bad for women.

The media is so after me on women Wow, this is a tough business. Nobody has more respect for women than Donald Trump!