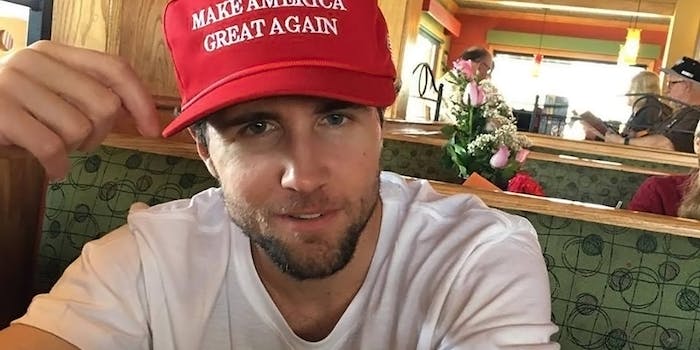 The perpetrator of the hoax has published violent fantasies about murdering Mexicans online.

After Baton Rouge authorities revealed the identity of the man who shot six police officers on Sunday and killed three, hundreds if not thousands of people rushed to view the Facebook profile of Gavin Eugene Long from Kansas City, Missouri. What they found instead was a hastily prepared hoax.

In the words of the hoaxster, a Donald Trump supporter who publishes violent fantasies on his Facebook about murdering Mexicans, those rushing to the Facebook page did so “not just to satisfy a morbid curiosity of looking at his pics & posts, but to express either their love or hatred for [him].”

The Facebook profile many discovered (which is now suspended) depicted a young black man in a white baseball cap. But the profile picture was not of the Baton Rouge cop killer; it was instead a premeditated attempt to trick careless Internet users into circulating a photograph of the wrong man. Those who visited the page and are even moderately perceptive likely determined it was a fake: The profile pic, after all, was uploaded after police had declared Long dead. 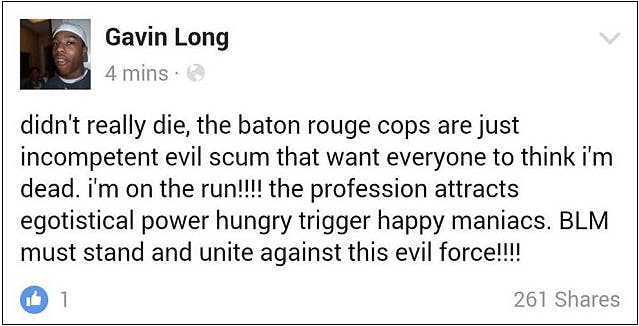 A closer look at the fake profile revealed the faux Gavin Long was “employed” by a website called Newsball, which, according to a 2014 profile at the Daily Beast, is operated by Cole Bartiromo. (An email sent by the Daily Dot to Newsball was also replied to by someone claiming to be Bartiromo.)

Bartiromo is perhaps remembered best for gracing the cover the New York Post on April 30, wearing a Donald Trump T-shirt with his face coated in blood. After engaging with anti-Trump protesters, a girl ripped Bartiromo’s “Make America Great Again” baseball cap from his head. When he lunged for the girl, he was “sucker punched” in the face, leaving him photogenic enough for the cover of the Post the next morning. (Bartiromo may also be remembered for a U.S. Securities and Exchange Commission press release dated January 2002, which identifies him as the “mastermind” behind an Internet swindling scheme, as OC Weekly uncovered in May.) 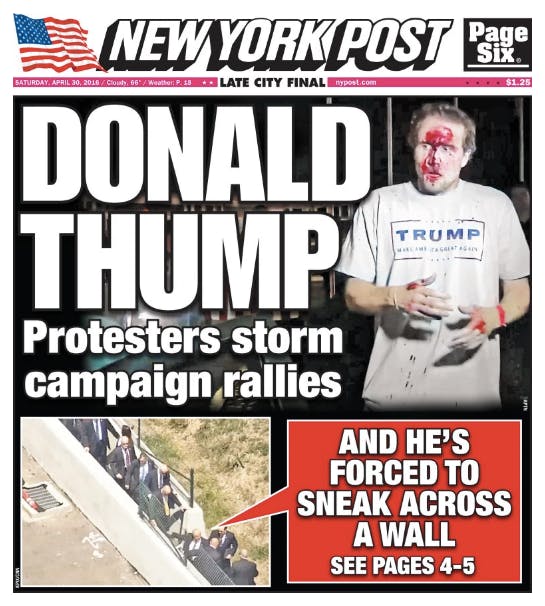 According to the Beast, Bartiromo was imprisoned for 33 months after pleading guilty in 2004 to “two counts of conspiracy and bank fraud related to an incident in which he tried to convince a Wells Fargo teller to write $450,000 to an offshore account so he could gamble on sportsbooks, promising he’d have the money back before anyone noticed plus a hefty purse to split.”

Bartiromo has also apparently attempted to pass himself off as the relative of a Fox Business anchor who shares his last name. Maria Bartiromo, host of Sunday Morning Futures on Fox News, took to Twitter in May to publicly denounce him.

I have no cousin named "Cole" this is not the first time this person has lied created stories he is related to me. He is not. Stop the lies

As for why Bartiromo decided to impersonate the Baton Rouge cop killer, he directed the Daily Dot to a rambling blog post in which he reiterates his fealty to Donald Trump. In his opening paragraph, he explains that, while he supports Trump, he also supports “African Americans, Hispanics, & Whites in this fight against the corruption & evil in law enforcement.”

Bartiromo goes on to explain that Trump supports all Americans who enter the United States legally—except for Muslims, who, Bartiromo says, “need to be in the very least monitored & tracked to prevent & detect radical Islamic terrorists in the making.”

“Out of the 323,000,000 million people in this country, Trump supports & cares about the well-being of 309,000,000 million of you,” Bartiromo writes. “The other 14 million we can do without because we either enforce our laws & protect our citizens from terror—or the nation is lost!” The intensity of his hatred for Muslims is perhaps demonstrated best through a Facebook post previously cited by OC Weekly, in which he declares: “I want all Muslims dead.”

Bartiromo expanded on his prejudice in a violent fantasy about murdering immigrants posted to Facebook in February. The post contained a link to a CNN article about Trump chastising former Mexican President Felipe Calderon, who said Mexico would never pay for Trump’s “stupid wall.” Bartiromo laid out his own plan for enclosing “killer animals,” such as “lions,” between two walls at the U.S.-Mexico border:

“Once a month helicopters drop meat down to the zoo-like beasts. Any mother fucker digging tunnels under the 1st wall will pop up in between the walls & be eaten alive by the hundreds of beasts in every damn area from California to Texas. If we invest in animals living in between these 2 walls, the walls themselves don’t have to be high at all, nor thick. Let them dig under them & face off with an African Safari like border.”

The Newsball post attributed to Bartiromo, in which he proclaims law enforcement “evil,” explains that he intentionally circulated a photo of an innocent person of color, linking him to the Baton Rouge murders, because he wanted to demonstrate how “infected this country is with completely insane &/or gullible mindless people of society.”

Bartiromo notes again that he is “not on the side of police & law enforcement.” Finally, he says, “seeing the moment was at hand where thousands of people were searching for Gavin Long every hour today, it was an opportunity to spread the message that a major Trump supporter with stature…supports YOU.”

Bartiromo further explains that he is neither happy nor sad when cops are murdered, but “entertained by the news coverage.”

The Daily Dot was unable to identify the man in the fake Gavin Long profile, though his picture has been online for some time under the description “Eerin the token black guy.” As noted by Snopes on Sunday, it is the fourth picture returned by Google during an image search for “black guy.” Whoever he is, it is unlikely he would enjoy having his identity conflated with that of a mass murderer.