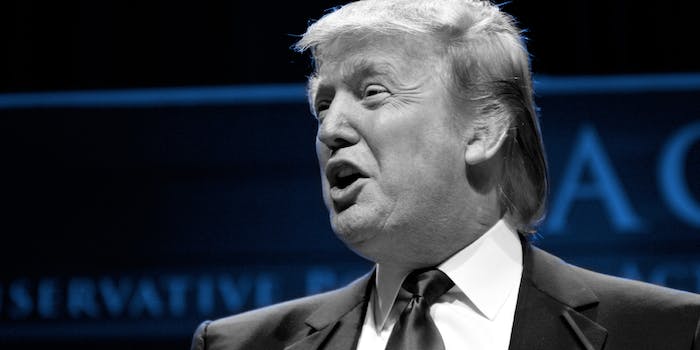 Don't think that Rosie O'Donnell didn't know what Donald Trump was up to on Thursday.

Donald Trump tore into his fellow Republican presidential candidates at Thursday night’s debate. Amid the many barbs aimed at those candidates and even the moderators, Trump also found time to insult comedian Rosie O’Donnell. But O’Donnell didn’t resort to name-calling in response. Instead, she said we should think of the children.

Trump’s jab at O’Donnell came after Fox News host Megyn Kelly, one of the debate’s moderators, asked the New York businessman about his history of verbally degrading women.

O’Donnell was not amused by Trump’s comments, as she made clear Thursday night.

try explaining that 2 ur kids

In the past, Trump has called O’Donnell a “loser” and “crude, rude, obnoxious and dumb.”

O’Donnell told the Daily Mail, “Probably the Trump stuff was the most bullying I ever experienced in my life, including as a child.”

Here is the complete transcript of Kelly’s question and Trump’s response.

KELLY: You once told a contestant on Celebrity Apprentice it would be a pretty picture to see her on her knees. Does that sound to you like the temperament of a man we should elect as president, and how will you answer the charge from Hillary Clinton, who was likely to be the Democratic nominee, that you are part of the war on women?

TRUMP: I think the big problem this country has is being politically correct.

I’ve been challenged by so many people, and I don’t frankly have time for total political correctness. And to be honest with you, this country doesn’t have time either. This country is in big trouble. We don’t win anymore. We lose to China. We lose to Mexico both in trade and at the border. We lose to everybody.

And frankly, what I say, and oftentimes it’s fun, it’s kidding. We have a good time. What I say is what I say. And honestly Megyn, if you don’t like it, I’m sorry. I’ve been very nice to you, although I could probably maybe not be, based on the way you have treated me. But I wouldn’t do that.

But you know what, we — we need strength, we need energy, we need quickness and we need brain in this country to turn it around. That, I can tell you right now.

Trump took Kelly’s question about his attacks on women and turned it into an attack on Kelly herself.