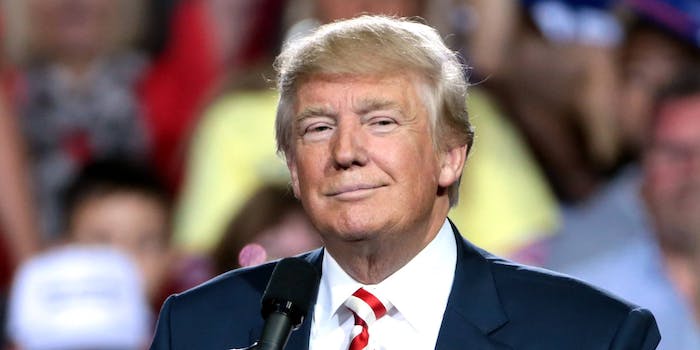 Trump’s draft executive order could deport immigrants for being poor

It's unclear if Trump will move forward with these leaked drafts.

Last week’s restriction on Muslims and refugees was apparently just the beginning of President Donald Trump‘s immigration reform. Leaked draft executive orders obtained by Vox and the Washington Post show the White House is considering denying and deporting immigrants on the basis of welfare, with families of those immigrants footing the bill.

The draft order, titled “Executive Order on Protecting Taxpayer Resources by Ensuring Our Immigration Laws Promote Accountability and Responsibility,” calls for the Department of Homeland Security to deny immigrants from entering the U.S. if it’s determined they will receive any kind of money from the government, be it in cash or in-kind benefits.

“Our country’s immigration laws are designed to protect American taxpayers and promote immigrant self-sufficiency. Yet households headed by aliens are much more likely than those headed by citizens to use Federal ­means-tested public benefits,” the draft order reads.

However, the order fails to provide evidence to support the claim regarding immigrant-headed households, nor have experts reached such consensus, according to the Post.

The federal government can stop someone from entering the U.S. or from becoming a legal permanent resident if it’s determined they’ll become a “public charge,” and depend on federal cash benefits. However, the order would open this determination to include in-kind benefits like Medicaid and food stamps, too.

The order calls for immigrants with U.S. visas who receive such welfare within their first five years in the country to be deported. And the friend or family member who sponsored the immigrant would have to reimburse the federal government for the benefits the immigrant received.

The order also wants to make these numbers public—it would make the government publish biannual reports on benefits used by immigrants, and reports on how much money could be saved, as well as how that money could be redirected to U.S. programs to go to “inner-city communities, and to disadvantaged youth.”

Ultimately the order seeks to crack down on resources used by immigrants, regardless of visa and green card status, as a means to indicate that immigrants are wrongly taking tax money.

A second order, “Executive Order on Protecting American Jobs and Workers by Strengthening the Integrity of Foreign Worker Visa Programs,” wants to stop the “jobs magnet” from driving immigration by unauthorized workers, and would rescind work visa provisions for immigrants found not to be in “the national interest” or in violation of immigration laws.

It also wants to make U.S. immigration “more merit based” by having site visits at companies that employ foreign workers, having Homeland Security report the total number of foreign-born people authorized to work in the U.S. biannually, and combating “birth tourism,” the concept that non-citizens have children in the U.S. as an effort to gain citizenship.

According to the Post, the draft orders have circulated the desks of administration officials. It’s unclear if Trump will move forward with them. The White House did not confirm the authenticity of the draft orders with the publication, and did not return requests for comment.

Read the full reports on the two orders by Vox and the Washington Post.