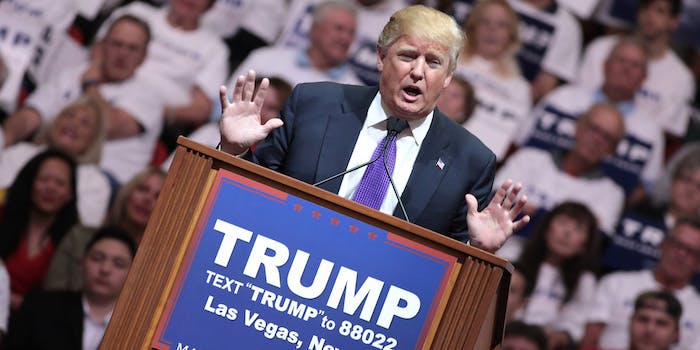 Trump's campaign continued to deny that the incident occurred despite video proof.

Corey Lewandowski, Donald Trump‘s campaign manager, has been charged with battery for grabbing a former Breitbart News reporter during a rally in Florida.

Despite the fact that the video clearly shows the incident, the Trump campaign denied that Lewandowski had struck Fields, saying in a statement that he was “absolutely innocent of this charge.”

BREAKING – Statement from Trump campaign on Lewandowski FL assault charge. He will plead not guilty pic.twitter.com/nMcDsTX7Pd

Wow, Corey Lewandowski, my campaign manager and a very decent man, was just charged with assaulting a reporter. Look at tapes-nothing there!

Fields, who left Breitbart after the conservative blog’s tepid response to the incident, filed a criminal complaint against Lewandowski for grabbing her and pushing her to the ground as she asked Trump a question at the rally.

Trump initially said that Fields might have “made up the story,” despite video evidence and eyewitness reports to the contrary. Fields posted a picture of the bruise that she received from the incident.

While Jupiter police did not continuously detain Lewandowski, they issued him a “notice to appear” in court to answer the battery charge, which is formally considered an arrest.

Lewandowski’s attack on Fields is part of a larger pattern of violence at Trump rallies. North Carolina police at one point considered charging Trump with inciting a riot.

While it is unclear from the video released by Jupiter police whether this happened, Trump appeared to confirm the reported Secret Service member’s statement and questioned whether he could press charges against Fields.

Victory press conference was over.
Why is she allowed to grab me and shout questions? Can I press charges? pic.twitter.com/qbW2RjkINX

Why is this reporter touching me as I leave news conference? What is in her hand?? pic.twitter.com/HQB8dl0fhn

Correction: While Lewandowski has not been continuously detained, a “notice to appear” technically constitutes an arrest.