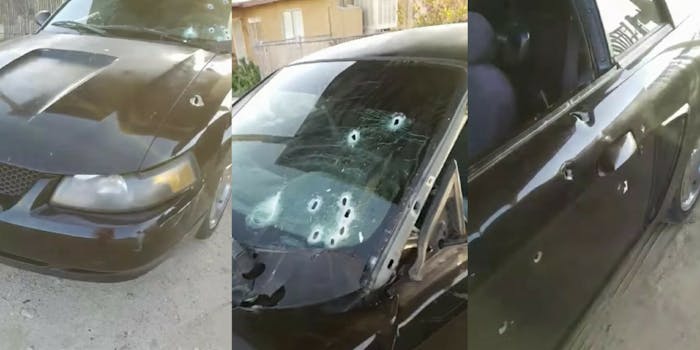 Police say his vehicle was 'suspicious.'

A 26-year-old Bawstow, California, man was fatally shot by police earlier this month while driving his cousin and friends to a local Walmart. According to the Guardian, the man’s family and legal representation believe the fatal shooting to be another example of excessive police force against an unarmed Black man.

According to the publication and the Root, Diante Yarber was sitting in the parking lot in a black Mustang on April 5, waiting for his passengers to return to the car, when police say they received a call about a “suspicious vehicle” in the lot. A press release for the San Bernardino County Sheriff’s Department states officers believed the driver, Yarber, was “wanted for questioning in a recent crime involving a stolen vehicle.”

The institutional racism that got 2 blk men arrested at @Starbucks got #DianteYarber killed for looking suspicious outside of @Walmart 30+ bullets poured into a car filled with people posing no threat to anyone! https://t.co/di3VKE9djL

Police allege that when they went to attempt a traffic stop on Yarber, he reversed into a patrol car, then accelerated toward officers and struck a second car, leading police to fire what “sounded like more than 30 bullets,” according to the Guardian. Yarber died at the scene, while 23-year-old Marian Tafoya was shot in the abdomen and leg.

However, according to Yarber’s aunt, her nephew was driving her son’s car at the time and her son was also in the car, which was never reported stolen. Additionally, Aleta Yarber has since gotten the car back and told the Guardian that it did not appear to have rammed into police vehicles.

“Apparently, we’re not supposed to ask when they made that determination” that Yarber was wanted for questioning, the Root’s Kirsten West Savali speculated: Was it “when Barstow Police responded to a call about a ‘suspicious’ vehicle parked in a grocery store parking lot on a Thursday morning, or after they pumped that car full of bullets”?

Yarber was the father of three girls, ages 9, 7, and 19 months. Yarber’s fatal police shooting comes less than a month after Sacramento police fatally shot 22-year-old Stephon Clark within the confines of his grandmother’s backyard. Clark was unarmed and holding his cellphone.

A police spokesperson said the “involved officers” are on “paid administrative leave,” and declined to share the number of officers involved as well as the number of bullets fired. Police have called the incident an “assault” on an officer, though Yarber was unarmed and officers were not in the path of the vehicle, according to the investigation.

“They saw a car full of black people sitting in front of a Walmart, and they decided that was suspicious,” Lee Merritt, an attorney for the family, told the Guardian. “They just began pouring bullets…It’s irresponsible. It’s dangerous. It’s mind-boggling, the use of force.”