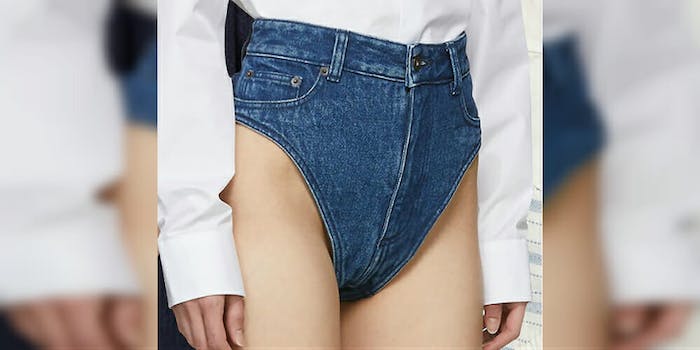 The internet has questions about these $470 denim undies

Here's a very expensive way to get chafed.

Would you buy denim undies? No? What if they were available for the low, low price of $470 and came with a wedgie? Still no?

Well, the e-store SSENSE is promoting a pair of denim “shorts” from the Parisian fashion brand Y/Project on Instagram. “Two words: denim panties,” it captioned the photo on Wednesday. Despite what SSENSE and Y/Project thought, these are two words that almost no one has ever wanted to hear together.

“This def ain’t it ladies,” wrote one Instagram user in the replies. “Chafing is great,” wrote another.

The SSENSE site describes the strange article of clothing as “brief-style shorts,” which is a fun way to say they’re shorts the size of underwear. These aren’t just briefs, these are cheeky briefs, leaving a frankly uncomfortable amount of butt exposed to the world. Not even in a prudish way—just imagine sitting on a public park bench in these “shorts.” Even if you like the feel of high-cut underwear—something in a soft cotton or silk—those can often ride up in an uncomfortable way. The idea of experiencing that with a material like denim makes me want to pre-emptively put an ice pack on my crotch.

And you know there is no room in those pockets.

At least a little bit in on the joke, SSENSE shared the “shorts” on Twitter, calling them “janties” and saying that probiotics are not included. Even when served with a sense of humor, the janties still baffle the minds of many.

What in the yeast infection hell is this?!

If these denim briefs fit your aesthetic, there’s some good news. They were originally listed for $470, but have since been reduced to $315, possibly in response to so many people saying they don’t want them. If you wait long enough, they might even throw in a wedgie protector.