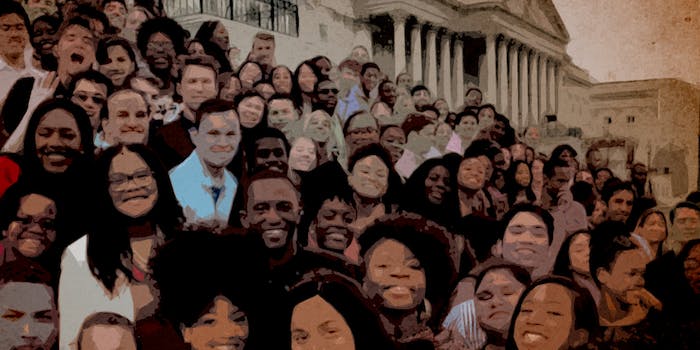 Take notes, Speaker of the House.

After House Speaker Paul Ryan (R-Wis.) drew attention for his #InternsSoWhite selfie, a group of Democratic interns working at Capitol Hill decided to show the world how representation really looks.

On Tuesday, U.S. Rep. Eddie Bernice Johnson (D-Texas) tweeted a photo of a group of Democratic congressional interns. And it’s not hard to spot the difference between Johnson’s and Ryan’s pics.

I think this sets a record for the most number of #CapitolHill interns in a single selfie. #SpeakerSelfie.

Johnson is not the first to call out Ryan for his seemingly all-white photo, however. Both House Democratic Conference Chairman Xavier Becerra (D-Calif.) and U.S. Representative Barbara Lee of Oakland tweeted a picture of their diverse interns.

Proud of my phenomenal & accomplished summer 2016 intern crew, who come from many walks of life. pic.twitter.com/HV9IyQpOMJ

Thank you to all my hardworking #CapitolHill interns! We had a great group this summer. #BecerraSelfie pic.twitter.com/VEJIiL3UtJ

According to USA Today, interns in Johnson’s selfie reportedly said the picture was taken to highlight the minorities who are currently working at Capitol Hill. And it seems almost every nonwhite congressional intern made the time to prove that point.