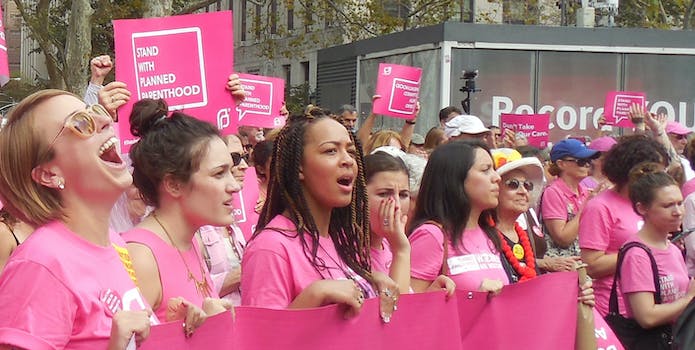 Millennials who think they've been silenced are fed up with a senior Democratic Party official.

Attend any Planned Parenthood, NARAL, or other reproductive rights rally in any major U.S. city and you’ll see a diverse assortment of women gathering for a diverse array of reasons. One constant, however, is the presence of young women.

Young women are extremely active in the reproductive-rights movement, participating in campus organizing, serving as clinic escorts, and publicly sharing their stories. But many of them believe that their contributions to the movement are consistently undervalued or erased altogether.

“Here’s what I see: a complacency among the generation of young women whose entire lives have been lived after Roe v. Wade was decided,” Wasserman Schultz said.

The backlash to her remark was swift. More than 9,000 people have signed a petition asking her to step down as head of the DNC. On Twitter, millennials and their allies have been rallying under the hashtag #DearDebbie for more than 24 hours.

Born after Roe and not complacent? Join in on #DearDebbie and let her know all the things you're doing for abortion & justice. @DWStweets

In an email to the Daily Dot, Matson explained that she started #DearDebbie because Wasserman Schultz’s comment simply “isn’t true.”

Matson cited youth engagement in clinic escorting, abortion fund meetings, and hashtags like #DearDebbie and #ShoutYourAbortion as high-profile evidence that young women are anything but complacent when it comes to the reproductive-rights movement.

“It is largely younger people who are driving the grassroots movement for abortion access and reproductive justice today, and anyone who claims they’re apathetic or missing is clearly out of touch,” said Matson, adding that the individuals who are truly complacent are the “allegedly pro-choice officials who talk a big game about reproductive rights when it’s election time” but who rarely follow through in Congress.

Matson also highlighted the congresswoman’s alleged hypocrisy in her own #DearDebbie tweets.

#DearDebbie, complacency looks like saying "Roe" instead of "abortion."

Many of the other women using #DearDebbie echoed her criticisms.

#DearDebbie: how many proactively prochoice laws have the legislators you've helped elect pass to increase access to #abortion? (hint: 0)

I’m still so mad about @DWStweets comments, especially bc I heard about it while sharing my abortion story in front of SCOTUS. #DearDebbie

#DearDebbie I've dedicated my life the past seven years to organizing for reproductive health, rights, and justice. Am I complacent?

I just don't understand. The abortion access movement is dominated by young people. Is @DWStweets even looking at us? #DearDebbie

Matson believes that these tweets are a powerful form of protest. Reproaction launched its own petition condemning Wasserman Schultz and her remarks, and Matson told the Daily Dot that the group will include a sampling of #DearDebbie tweets when the petition is presented to the congresswoman’s office.

“I’m a big believer in all forms of activism—online and offline,” she explained. “I believe social media activism, including but not limited to the use of hashtags, plays a huge role in helping to destigmatize abortion and create a cultural climate that will be more favorable for advancing equality and dignity in the future.”

Wasserman Schultz had not responded to demands for her resignation at press time. But she did respond to the larger backlash on Twitter.

Millennials know that wasn't the case – they are leaders in the fight to protect abortion rights. They know progress isn’t final. 2/6

But even when we’ve achieved big victories, like with Obamacare, we continue to see the other side try to roll back progress. 4/6

The mantle must be carried by each generation. We have 10 months to elect the next Democratic president. Let’s keep fighting, together. 6/6

Her clarification is unlikely to slow down the #DearDebbie stream. The young women using the hashtag believe they are being silenced—and they’re not willing to let their contributions to the fight for social justice be undermined any more.