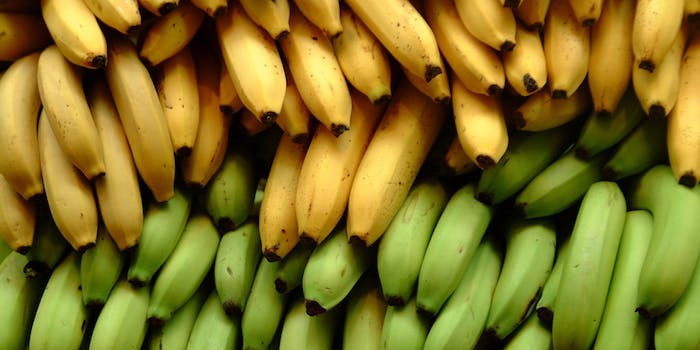 Does that really make it less cool?

When Brazilian-born FC Barcelona defender Dani Alves saw someone throw a banana at him during a game in Villareal, Spain, he didn’t let the racist taunt mess up his gameplay. He took a bite out of the damn thing.

FIFA President Sepp Blatter called it an outrage on Twitter.

And Alves’ teammates Neymar, showing the beloved player eating a banana with his son on Instagram with the hashtag #WEAREALLMONKEYS.

Neymar’s hashtag caught on as fans and fellow players rushed to post their own anti-racism images on social media, adding #SAYNOTORACISM to their banana-eating posts.

It was all very warm and fuzzy. Except it was no accident, or evidence of a grassroots empathy uptick. According to reports in the Spanish press, it was a marketing campaign concocted in advance by Alves, Neymar, and marketing agency Loducca.

After enduring similar racist taunts this past season, Alves and Neymar discussed how to successfully turn the abuse into an awareness campaign and consulted with Loducca. They decided that one of them would eat the next banana thrown at them during a game, and the other would tweet in support.

The plan worked out perfectly: It raised awareness of the racism minority athletes face. The news that it was planned by a marketing agency may leech some excitement out of the stunt, but it shows impressive initiative on Alves’s and Neymar’s part anyways. These two players wanted to send a message—a good one—and so they planned and crafted one with professionals.