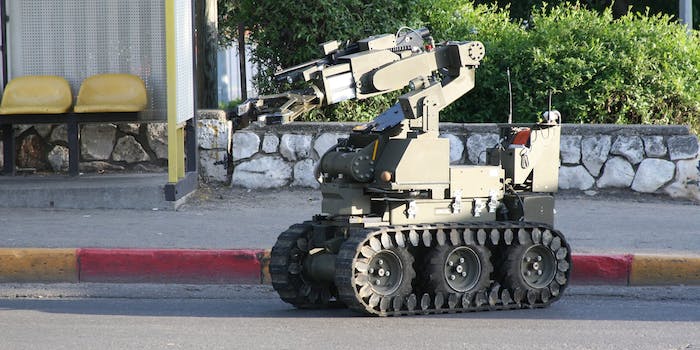 Dallas police believed to be first in U.S. to kill a suspect with a robot

Police robots can be lethal. Can they also be hacked?

The Dallas police appear to be the first law enforcement agency in the United States to use a robot to kill a suspect.

In a Friday morning press conference after the shooting deaths of five police officers, Dallas Police Chief David Brown announced the unprecedented method, which he said was used after other attempts at negotiation had failed.

“We saw no other option but to use our bomb robot, and place a device on its extension for it to detonate where the suspect was.” said Brown, describing the standoff between police and the suspect, identified as Army veteran Micah Xavier Johnson, on the second floor of a downtown Dallas parking garage. “Other options would have exposed our officers to grave danger.”

“We tried to negotiate for several hours,” Brown explained. “Negotiations broke down. We had an exchange of gunfire with the suspect.”

Brown ruled out earlier reports that Johnson had taken his own life, saying that evidence showed the bomb was the cause of death.

Brown also used the press conference to share snippets of the hostage negotiator’s conversation with Johnson before he died, explaining that the suspect had made it clear he was working alone and was not affiliated with any group or organization.

Robotics experts said on Friday that the incident amounted to the first time a U.S. police force has ever used a robot to kill someone.

Seth Stoughton, a University of South Carolina assistant professor of law and expert on police tactics, told the Atlantic that he was “not aware of officers using a remote-controlled device as a delivery mechanism for lethal force.”

“This is sort of a new horizon for police technology,” Stoughton told the Atlantic. “Robots have been around for a while, but using them to deliver lethal force raises some new issues.”

One of those new issues is whether such a bomb-equipped robot—or a lethal drone, for that matter—is vulnerable to hacking. After all, if hackers can crack the code on a Roomba to make it sing, paint, and offer Wi-Fi, who’s to say hackers can’t easily access tactical robots as well?

Coincidentally, iRobot is the company that manufactures Roomba in addition to several tactical robots created for defense purposes—like the PackBot, which was used in the Boston Marathon bombing investigation of 2013. The link between the hackable home vacuum bot and one of law enforcement’s most popular bomb robots raises questions about the vulnerability and security of the police robots.

Dallas police did not clarify exactly which tactical robot model was used to kill the shooting suspect on Thursday, but it’s likely that it was the tEODor (telerob Explosive Ordnance Disposal and observation robot), a bot that Dallas police employed in June 2015 during an attack on its own headquarters.

This is where the Explosive Ordinance Robot attempted to move one of the bags. #DallasPDShooting pic.twitter.com/mgbgytBhWv

According to a brochure for the tEODor, the bot is “capable of performing all the standard tasks of a bomb disposal engineer.” In simple terms, it can break down windows and doors, monitor using cameras and x-ray systems, destroy objects “by ballistic means,” and neutralize objects using icing and water-cooling systems.