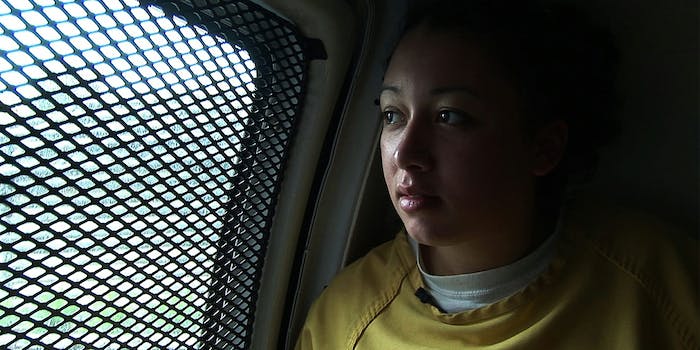 The community that made Cyntoia Brown’s clemency possible

Black women have been organizing for her release for years.

Last week, after 13 years in prison and much public outcry, Cyntoia Brown was granted clemency. Many might be familiar with Brown’s case because of celebrity supporters like Kim Kardashian and Rihanna, who have advocated for her release. But the battle to free the woman who, as a teen, killed a man in self-defense was more arduous and complicated than a few retweets.

It was less-famous Black women—including Brown’s family—who spent years rallying, organizing, and doing tireless work to bring attention to her case. To them, Brown’s story exemplified how Black sexual violence survivors are rarely believed and easily thrown into the U.S. prison system.

“I think [her case] resonated with a lot of folks because everybody knows a Cyntoia,” Brittany Paschall, an organizer with Black Lives Matter Nashville who helped launch a petition in Brown’s honor, told the Daily Dot. “It was an intersection of a lot of different violences—sexual violence, gendered violence, the violence of mass incarceration in this country. I think that people were seeing themselves and their communities in Cyntoia and that compelled them to act.”

Brown’s story is a heart-breaking, if not uncommon, one. She was given up for adoption at age 2 after her mother, an addict, could no longer take care of her. At age 16, she ran away from her adopted home in Tennessee and was eventually forced into prostitution by a 24-year-old man known as “Kutthroat,” who physically and sexually abused her. That same year, a 43-year-old real estate agent hired Brown for sex. Brown said she feared for her life, as the man showed her his gun collection, bragged about his shooting prowess, and grabbed her forcefully. So she shot him in self-defense.

From the start, the odds were stacked against Brown. Brown was an African-American teenage girl—a demographic that is historically mistreated by the criminal justice system. Black girls are suspended six times more than white classmates and are imprisoned at twice the rate of white girls. Tennessee law allows anyone over the age of 16 to be tried as an adult and only allows three sentencing options for those convicted of first-degree murder: “to death, to imprisonment for life without possibility of parole, or to imprisonment for life.”

In 2006, Brown was sentenced to life with the possibility of parole; she would have to serve 51 years before she could be eligible for release. However, momentum around her case didn’t fully materialize until the 2011 documentary Me Facing Life: Cyntoia’s Story, in which documentarian Dan Birman interviewed Brown and key family members over the course of six years.

“I was driven to make this film because I recognized my own knee-jerk reaction to her story. Initially, Cyntoia, in concept, was not a sympathetic character because I thought her story was just so similar to the daily grind of news reading: ‘Another youth becomes violent through drugs and prostitution,’” said Birman, a white man, in a 2011 interview. “Then I heard my own voice ignoring the obvious flaw in my thinking—a 16-year-old girl facing murder charges. There had to be more to the story.”

The film garnered international attention and helped influence new laws in Tennessee that made it impossible to charge minors with prostitution. The film also inspired lawyer Charles Bone to work with Brown pro bono. With this newfound momentum in 2012, Brown’s lawyers pursued a new trial to attain “post-conviction relief” for her on the grounds of the new Tennessee law and evidence. In 2014, Brown attempted to appeal court’s denial of her 2012 post conviction relief request.

did we somehow change the definition of #JUSTICE along the way?? cause….. Something is horribly wrong when the system enables these rapists and the victim is thrown away for life! To each of you responsible for this child's sentence I hope to God you don't have children, because this could be your daughter being punished for punishing already! #FREECYNTOIABROWN #HowManyMore

In 2017, Brown’s case reached a new sense of acclaim when a string of celebrities, including Kardashian and Rick Ross, shared her story on social media. Organizers told the Daily Dot that the newfound visibility of Brown’s story helped many people pay more attention, but they were clear that more personal work was done to help Brown had been happening for years, especially by members of Brown’s family.

“Lots of people, including Cyntoia’s mother, have been on this case since day one doing work to fight for Cyntoia’s freedom,” Ash-Lee Woodard Henderson, co-executive director of Highlander Center, which worked to build visibility around Brown’s case, told the Daily Dot. “Quite frankly, something that I’ve seen a lot of people remove Cyntoia’s agency for herself. She’s literally been defending herself since she was 16; trying to be free and going to school and doing all the things that she could do live her best life without guilt, shame, or apology.”

This was true: As many Black women know, Brown had to do much of the work to move past her trauma on her own. While incarcerated, she took classes at Lipscomb University, earning her associate’s degree, which she later said empowered her and changed her life. She also found a mentor in Bishop Joseph W. Walker III, who later called Gov. Haslam and advocated for her freedom.

Justice has finally been served: #CyntoiaBrown has been granted clemency. This victory belongs to Cyntoia Brown & to the Tennessee human trafficking activists, especially Black women, who refused to concede injustice & instead organized to create change. https://t.co/ANC0aOXj5N

This December, though, the work around Brown’s case grew urgent. Tennessee Gov. Bill Haslam was about to leave office in a month, and the pressure for him to grant Brown clemency was mounting. State Sen. Raumesh Akbari and Shelby County Commissioner Tami Sawyer, both Black women lawmakers, pushed for her release. Meanwhile, organizers went into overdrive.

During an event where Haslam was to talk about his education policies, BLM Nashville organizers and activists confronted the governor and demanded Brown’s clemency. Soon after, the #MeToo Movement, Black Lives Matter, Color of Change, and Highland Center launched a website to “Free Cyntoia.” The website exhibited a variety of tactics that had been used before in different capacities—online petitions, sending money to Brown, coordinating a day of action across the country, and more. Woodard Henderson noted that the coalition’s request for people to call Haslam to demand Brown’s clemency resulted, at one point, in the governor receiving over 1,500 calls an hour.

On Jan. 5, a rally was organized by Survivors of Sex Trafficking in Brown’s honor to continue the momentum. Sametria Hayes, a childhood friend of Brown, performed a song that she’d made for her friend titled “#FreeCyntoia.” That night, BLM Nashville organized another action that involved a series of rolling blockades of street intersections. One week later, the 15 years of collective struggle toward Brown’s freedom paid off. The parole board decided that Brown would be released in August with time served and 10 years of parole. This last part is a condition of her release that angers many community activists, Paschall and Woodard Henderson included. They say parole will leave Brown entangled with a criminal justice system that should have treated her humanely from the start.

Regardless, Woodard Henderson said, in light of Brown’s clemency, it’s important to move forward knowing communities are capable of freeing Black women and femmes from a justice system designed to overlook them. “I think that’s a huge thing—that liberation is totally within our reach, that things like getting our people released from these cages is not utopian,” she said. “It’s a thing that we can literally do and we have to keep fighting and continuing to use that energy to get more and more of our people free.”

Activists have already established a fundraising page for Brown’s life post-clemency and a second documentary, Me Facing Life 2: Cyntoia’s Fight For Freedom, is set to be released later this year. Supporting abuse survivors, prison survivors, and Black women doesn’t end with a single gesture or “victory.” They still live within the same society that failed them in the first place. Rallying to hold them up must be lifelong, continuous.