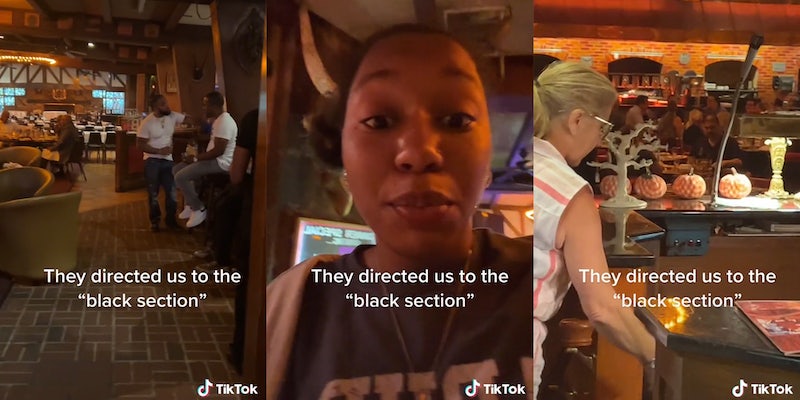 ‘That’s WAY too many people to be a coincidence’: Customer claims they got directed to the ‘Black section’ at restaurant, sparking debate

A Black TikToker claimed they were asked to sit in an area of a restaurant with predominantly Black people after asking to sit in another area, in which most customers were white.

“They directed us to the ‘black section,’” Banksu wrote in the text overlaying her video.

Some viewers did not believe that the restaurant had actually discriminated based on race. These users claims instead that Banksu was observing was a busy restaurant on one side, and a private party on the other. This theory is seemingly backed up by the fact that the tables on what Banksu claims is the “Black side” appear pushed together, and people from across the dining hall are conversing with each other.

“It kinda looks like the party section and a party is happening,” wrote one user.

“No disrespect but that clearly is a private party, looks like they have a cake with candles at the back….” observed a second.

“So, it looks like there’s a large party. also, there are white people in the ‘black section,’” noted a further TikToker.

However, others were convinced that what Banksu was observing truly was discrimination.

“Oh yeah no that’s WAY too many people so be a coincidence,” a commenter agreed.