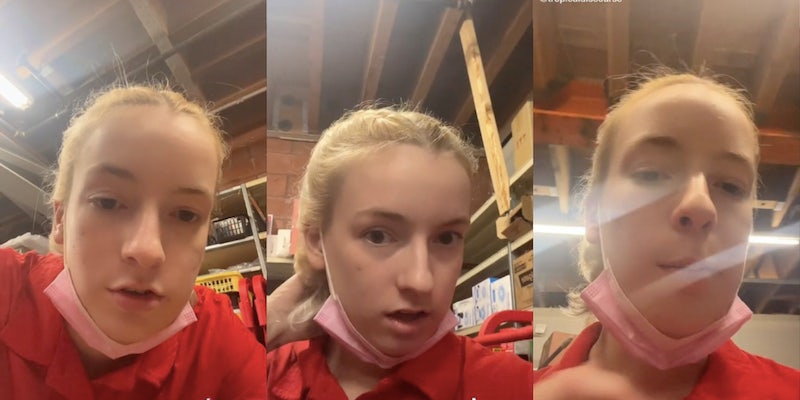 ‘If you ever wonder why a cashier is rude to you its because this is what we deal with every day’: Cashier tells customer she doesn’t need 8 cents in change, customer calls her impatient

A cashier on TikTok went viral after calling out a customer who claimed she was impatient, simply because she told her she didn’t need 8 extra cents.

In the clip, user @tropicaldiscourse films herself walking to the back of the store, sharing her encounter with the customer.

“Please don’t rush me,” the cashier claims the woman said. @tropicaldiscourse then reassured the customer that she wasn’t trying to rush her, instead, she was saving her the trouble.

“[The customer] takes the dollar, and then goes, ‘Can I just say, you really shouldn’t be working in customer service if you don’t have patience. I have anxiety, and you’re rushing me,'” @tropicaldiscourse recalls of their conversation.

“Give me back my dollar, bitch,” she concludes the video. “You owe me 8 cents.”

@tropicaldiscourse if you ever wonder why a cashier is rude to you its because this is what we deal with everyday🥰🥰 im simply done being nice to people. next time youre getting ¢92 in coins. #fyp #foryou #customerservice #xyzbca #cashier #foryoupage #trending ♬ original sound – i🤍milfs

The video received over 29,000 views since it was shared yesterday.

“If you ever wonder why a cashier is rude to you its because this is what we deal with everyday im simply done being nice to people. next time youre getting ¢92 in coins,” the TikToker added in the caption.

In the comments, viewers criticized the customer’s behavior.

“You did her a favor! Ok now she owes you 8 cents,” one person wrote.

‘All that was some issue of her’s and had zero to do with you. Don’t even let it affect your day at all,” a third agreed.

Others argued that @tropicaldiscourse was in the wrong for not giving the woman her exact change.

“Quick question though…why not give her the 92¢?” one person asked.

“Just give them the right change next time? this is a you problem lol” a second wrote.

“No hate but just give them back exact change,” a third commented,

The Daily Dot reached out to @tropicaldiscourse via TikTok comment.