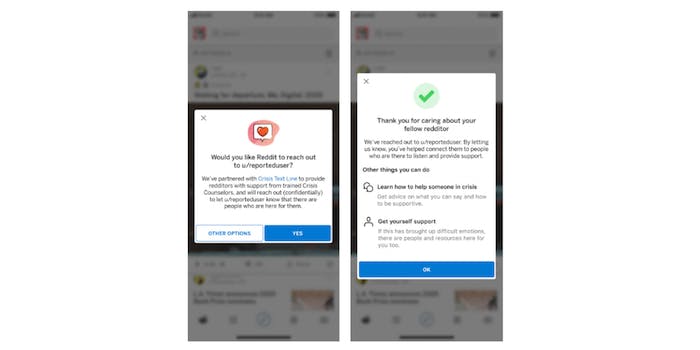 Users can utilize the text-based service if they are flagged.

Reddit this month announced a partnership with Crisis Text Line, a free and confidential crisis mediation service. This partnership provides redditors with access to help when they need it if they are unable to speak with someone directly due to issues of comfort or safety.

Redditors will be connected to Crisis Text Line if they are “flagged” for concerning behavior, and they will also be offered the option when they are reporting someone, according to Reddit’s announcement. Users will then be able to discuss their issue for whatever length of time they require, with someone who asks questions, actively listens, and empathizes.

In a joint AMA from Reddit and Crisis Text Line, the platforms wrote that this partnership comes as a solution to concerns for user safety such as users voicing that they are “considering suicide or self-harm.” They also wrote that there is a rate-limiting fixture on the back end to make sure users who are being reported don’t receive multiple messages in succession during a time of crisis.

The partnership has received praise online from both new and longtime users. Dan McComas, former senior vice president of product at Reddit, wrote in a tweet that this has been a long time coming.

“This was always a very difficult thing to deal with at reddit,” McComas tweeted. “Really love that they’re being proactive in working through this.”

However, replies to the AMA in the r/Modnews subreddit were concerned with whether directing users in stress to Crisis Text Line would actually be of any help.

“I think being allowed to speak freely about the topic, and finding caring voices, is waaay more valuable than being redirected to a ‘specialist’ trained to triage you into a hospital suicide watch or get you off the line if you’re not ‘considering suicide or serious self-harm’ and doesn’t actually give a fuck about you,” u/wakeamex wrote in response to the AMA.

However, some subreddit moderators said they were glad to see Reddit making this partnership, as they’ve witnessed concerning behavior in their communities that was left entirely in their hands to manage.

“As a mod who was highly frustrated with the current system of putting it 100% in our hands I was highly skeptical that there would be an actual solution to this,” u/techiesgoboom wrote. “But I’m happy to say I was totally proven wrong, because this is absolutely fantastic! It doesn’t assign us extra responsibilities we aren’t qualified for but there’s still an immediate response when it’s needed. It’s a win-win-win. Thanks for putting this process in place! I’m really excited for it.”