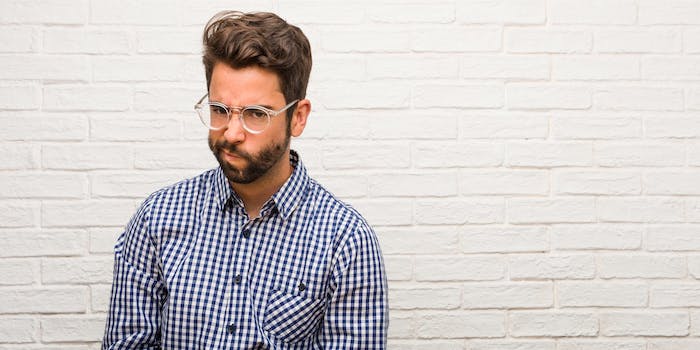 This insufferable pedant proves philosophy's more trouble than it's worth.

When you see a couple claiming they’ve been together for wildly different numbers of years, you know something shady’s going on. The recent post heading “AITA for telling people that my GF and I have been together for 1 year if she thinks it’s 6 years?” on the Am I The Asshole subreddit seemed to promise a juicy tale of infidelity and lies. But instead of some “I didn’t think we were serious so that’s why I was seeing other women” tasty drama, we instead got something much less wild and a thousand times more infuriating.

The original poster (OP) and his girlfriend started dating in high school and somehow made it all the way through college. An incredible achievement for even the most well-adjusted of high school sweethearts and an unbelievable feat for an insufferable pedant like OP. You see, he and his girlfriend had a big fight over his choice of grad school, in which they broke up for ninety whole minutes. Like most reasonable people, the two of them didn’t actually count this as the end of their relationship and have, up until recently, both been telling people that they’ve been together for six years.

However, OP has read a book. A philosophy book. And what this book has taught him is that it’s very important to count that hour and a half long break up as an official one and restart the timer on their relationship. In his own words:

“I recently read a philosophy book about the vagueness of language and how we mostly just use inexact descriptions of things and that any true clarity is impossible using human language, but that we should still strive for precision whenever possible. I thought that was interesting and now I realize it’s not exactly true to say that my GF and I have been together for 6 years. If someone asked you how long is your string is you wouldn’t say that it was 6 inches if you had a 1 inch piece of string and a 5 inch piece of string. They’re two different things. If someone wanted to know the sum of the lengths of your string, they’d ask that. But the actual question, as well as someone asking for the length of your relationship, implies continuous measurement, not a discrete sum.”

So now he tells everyone they’ve only been dating for one year, and he doesn’t understand why she’s annoyed. After all, his count is more accurate and apparently it’s “vital information” that they broke up for a full hour and a half five years down the line.

Reddit, and Twitter alike once it made the jump there, appears to have done a collective eye roll and groan at the mention of his having read a book on philosophy.

Everyone wanted OP to know that the intricacies of his relationship timeline are not the “vital information” he thinks they are. Literally no one cares that you broke up for an hour and a half OP. No one.

Almost more importantly, this isn’t even the most accurate way to describe their relationship. Obviously no one actually wants to know that much about their romantic life but if they did, telling them they’d only been together a year utterly misrepresents the length and nature of their relationship.

The pure disrespect of his girlfriend and her perspective rubbed a lot of redditors the wrong way.

Basically OP is just an asshole.

And, just in case OP needs to hear it from a certified philosopher, one happened to jump on Twitter to tell OP that in his professional opinion OP was both the asshole and didn’t even understand the philosophy he was arguing about. Read Grimes OP. And stop saying you’ve only been dating for a year.