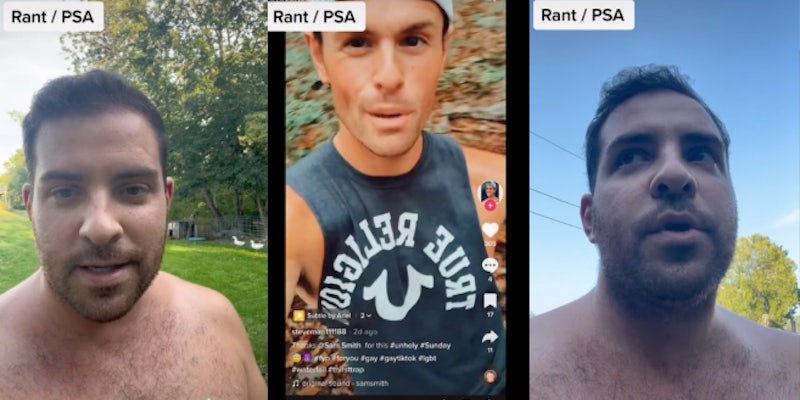 'I think that people should know the kind of monster that they're dealing with.'

TikToker Justin (@justincase312) went viral after speaking out against his ex-husband, another creator on the platform who posts under the handle @steveman111188. As of Sunday morning, his account has been made private.

In the video posted Thursday, Justin accuses his ex of abusing their child, which culminated in them losing custody of their baby. He publicly calls out his ex, who has been enjoying a modicum of TikTok fame on the platform, posting “thirst traps” under the “#gaytiktok” and “#lgbt” hashtags.

He also lambasts the court system for being bogged down in red tape and prolonging meaningful judgments.

“I said I was gonna rise above,” Justin begins, after stitching a video by his ex-husband, “and I’ve been in my garden for about an hour trying to talk myself off the ledge. But this is my ex-husband who physically abused our baby, who cost me a child, an entire lifetime’s worth of happiness, and a future, and continues to be free almost two years later. [He] just makes TikTok videos all day, and while some people may say like wow he doesn’t get to work like that’s a punishment, I mean, it doesn’t seem like he’s getting punished at all.”

Justin claims that they have repeatedly been to court, but he feels his ex experiences no regret for his actions based on his posts.

While Justin suggests that “he should have it all together” and shouldn’t be publicly calling his ex out, he notes that it’s important for those interacting with his ex’s content to understand his alleged past behavior.

“Everybody has a breaking point and I have reached mine,” he concludes. “And I just think it is horrible that people are out there liking his shit, commenting on his shit, in a flirtatious manner, that could potentially, I don’t know get in a relationship with this person? I think that people should know the kind of monster that they’re dealing with. So, here’s my PSA for the day.”

In a follow-up clip, the TikToker says he is still in contact with the child’s mother, noting that the baby has returned to its birth family and is doing well. He also adds that he decided to air his ex’s dirty laundry in an effort to “put some pressure” on legislators to take his case more seriously, something that a lot of other TikTokers echoed in the comments section.

“I just feel like if this case had more public pressure maybe there would be more assertion to do something about it,” the TikToker says

Offering more context, Justin says he and Steve are divorced, and the two haven’t seen one another since the hearing. He also states that while he doesn’t “condone violent or aggressive” hate speech against the man, he wants folks to avoid being “hoodwinked” by him. Justin also claims he doesn’t believe that his ex-husband should be around children, either.

He went on to say that prior to discovering his ex abused their baby, there were “no warning signs.” Justin says they went through multiple adoption agencies and had undergone psychological evaluations, and there was nothing to indicate that he was “a vile human,” as one TikToker asked.

The creator divulged more information on his case in a series of TikToks, as well as a new podcast he launched as a result of folks who kept inquiring about his relationship with his ex.

Viewers were horrified by his experience and encouraged him to keep uploading videos until his case was dealt with, despite the fact that someone, who he suspects to be his ex, is reporting all of his posts.

“Abusers can never let us live life after them, they need us to be miserable,” one user wrote. “I hope you get the justice you and your child deserve.”

“You are not out of line. In fact you are very calm. you are giving the facts and you should 100% I am so sorry he took so much from you,” another added.

“Watching the person who traumatized us just live a ‘normal’ life while we suffer with the aftermath feels like more betrayal. Be gentle with yourself,” a third stated.

The Daily Dot has reached out to Justin via TikTok comment for further information.