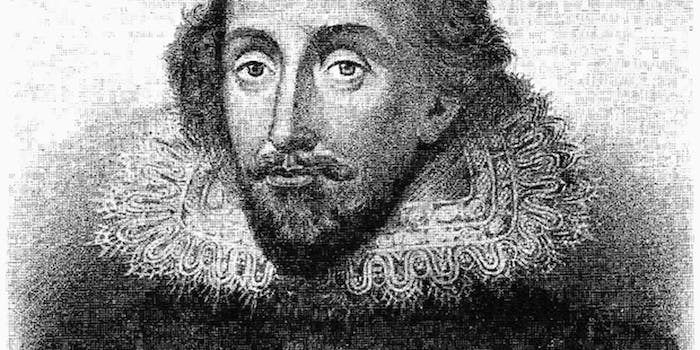 There might be a love poem written just for you.

Craigslist’s Missed Connections is one of the most curious manifestations of modern romance. There we are able to project a multitude of feelings of about our love lives—fear, hope, regret, obsession, and of course, longing.

A Missed Connections post follows a standard formula: in any given city, the person writes where they saw the person of their dreams, describes an interaction they shared, and offers up a date and/or lay if the person in question can reasonably prove it was them. Such missives are written to everyone from the “girl on the train” to the “sexy tattooed boy at Equinox.” Sometimes there are dick pics involved (actually, far too often there are dick pics involved).

But there’s a school of Missed Connections writers who use the forum for so much more. They’re the secret poets of Craigslist. 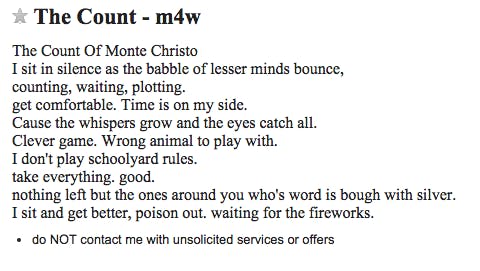 Across numerous cities, Craigslist users are utilizing the classifieds forum as a publishing platform for poetry, romantic prose, and cryptic messages about relationships and sex. Sometimes these poems seem directed toward a specific person, though both parties usually remain anonymous. Other times they appear to just be poems, published as any amateur would on their personal blog. For a time, there was a Tumblr dedicated to collecting these poems, but it never answered the lingering question of just who these people were, and why they were using a classified site to host such paeans. 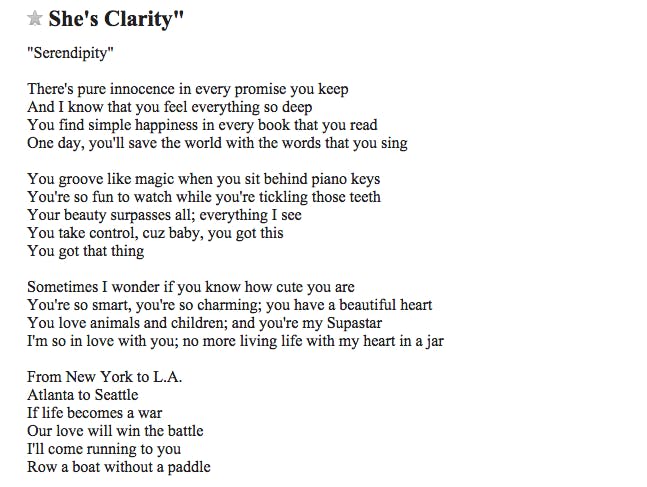 One anonymous user told the Daily Dot over email that his piece, titled “She’s Clarity,” was written for the love of his life—though it’s unclear if she is aware of its existence. Another poet, Pyle, called his haikus “an art concept hoping to reconnect with a girl I had met for a first date.” According to Pyle, who described himself as an “all-around artist,” the two had an enjoyable evening together and he walked her home, but they have yet to see each other again. “I know she may check Missed Connections, so I thought to write something short, and identifiable,” he explained. “She’s sweet and I thought to write one each day until we would see each other. (7 Haikus) Wishing for the best.”

Such poems are greater than the more-florid-than-average Missed Connections, but deeper messages of love and betrayal directed at specific people.

The poems are not Pyle’s primary mode of contact. They’ve been texting since their date, but Pyle enjoys posting the poems on Craigslist as something in between an art project and The Secret. “I am not a stalker ya know (sic), just sending some energy into the ether,” he told the Dot.

But the question remains: why Craigslist? Part of it is just familiarity. “Craigslist is an old school Internet site, for me, I don’t have a full grasp of the most recent social media or community sites, that may offer similar services,” Pyle explained.

But the fact is most social media sites don’t offer Craigslist’s main service: total anonymity. Most Craigslist poems do not name names or call out specific details. They are written to a mystery “you” or “baby” or “love.” They are for nobody and everybody. They could be for you. This is the appeal of Craigslist over other platforms. There’s an ability to stay completely hidden, to have your words speak for themselves, and to create what others will consider found art. Sites like Medium or Tumblr allow for an anonymous username, but one that’s still consistently attached to the work rather. On Missed Connections, a poet is only attached to a randomly generated series of numbers. 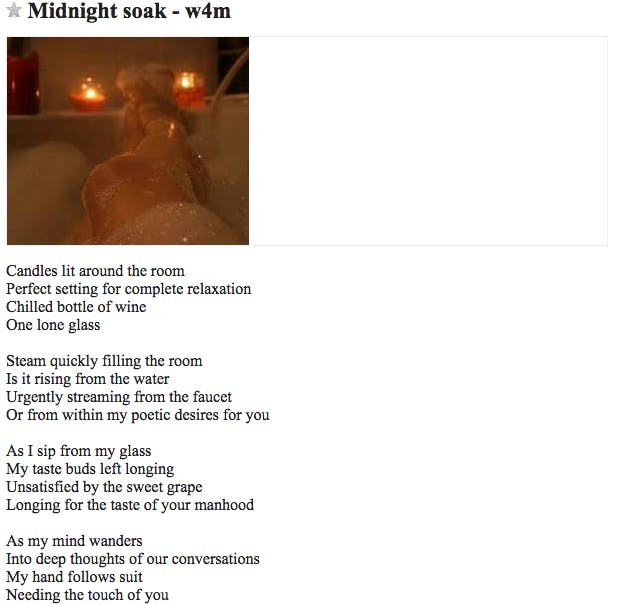 This allows all Missed Connections, whatever form they take, to be confessional in a way almost impossible on dating websites or in direct contact. “It is another late night for myself, 1:59 in the morning and all I can do to pass the time is read personals here on Craigslist,” writes one man, before launching into a story about a long-lost best friend, drug addiction, and the mistakes of youth. “I whispered into the cool breeze that I loved you and hoped it would somehow carry my words to you and you would know I was thinking of you,” writes another woman. The medium fosters an emotional vulnerability that doesn’t appear when there’s a username and a photo attached to the words or when their efficacy is not making someone swipe right.

On the Internet, anonymity can be dangerous. It allows predators, or just people, to say the worst things in their hearts without fear of repercussions. But the poems, prose and confessionals may be proof that, when nobody’s looking, there is good in there, too. The writers are not expecting anything in return. They are not demanding anyone’s time or attention. They are simply leaving notes in the world, at best romantic and at worst innocuous.

And when the next click down could be a dick pic, that becomes even more beautiful.