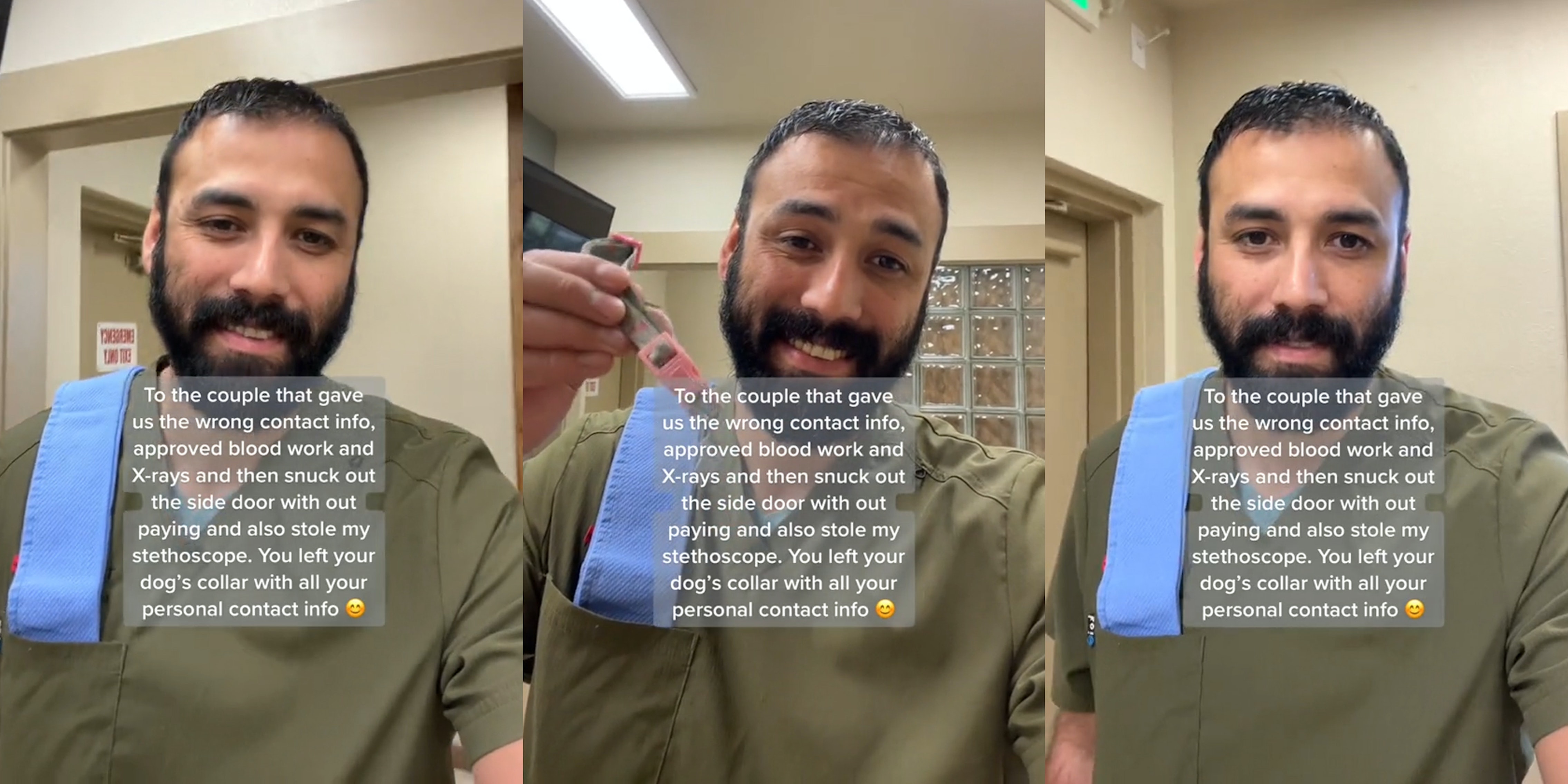 ‘What is it with people’: Vet tech says couple tried to get out of paying with fake phone number—but it backfired spectacularly

'I’m not saying they’re right but I understand.'

Veterinary bills can be expensive. While some have lowered their pet healthcare costs by finding ways to get cheap pet medication, others have opted for a less ethical solution: crime.

As one might expect, this doesn’t always work out the way the criminal intended. A video showing one of the many ways this plan can go awry recently went viral after being shared on TikTok.

In a video with over 3 million views, TikTok user and registered veterinary technician Pete (@vet_techs_pj) recounts how a couple tried to get out of a veterinary appointment without paying — but due to their own incompetence, Pete was able to track them down.

“To the couple that gave the wrong contact info, approved blood work and X-rays and then snuck out the side door with out paying and also stole my stethoscope. You forgot your dog’s collar with all your personal contact info,” he writes in the video’s text overlay.

In the comments section, Pete says that the original bill was for about $300. Furthermore, he claims that the couple returned after he texted them, saying they simply “left to get food.” The couple allegedly paid but denied stealing the stethoscope.

Some users were sympathetic to the couple’s plight, citing the high cost of pet care in the United States.

“Vet appointments are ridiculously expensive. of course we love our babies so we pay it. but I can see how people can’t,” one user wrote.

“Has pet care become that expensive that people feel the need to go through desperate measures?” a second questioned.

“I would’ve said it was fine if it weren’t for the stethoscope,” a third added.

Others users shared stories of theft from their own workplaces.

“I was manager of restaurant where 2 teens dashed and dined but as they jumped up one phone fell out,” one commenter recalled. “I called his mom and locked up his phone in back.”

“We had a patient steal a stethoscope recently!!! What is it with people,” a second asked.

“I had a patient steal my mobile phone… a human patient,” another shared.

A number of other users advised owners to get pet insurance to avoid high medical bills.

“People need to buy pet insurance. It’s not expensive and it just got me out of a $5000 vet bill,” one user claimed.

“I agree ever since I got insurance for my pup I feel way better about it something happened to him being able to pay for it,” another wrote.

The Daily Dot reached out to Pete via Instagram direct message.