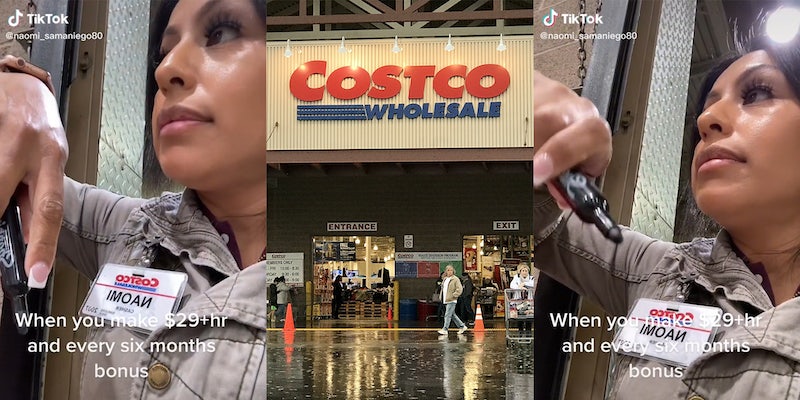 Costco worker says she makes $29 per hour and gets bonus every 6 months, sparking debate

'You only get paid that much after about 7 yrs of working there.'

In a viral TikTok, a Costco worker said she makes over $29 per hour and receives regular bonuses, sparking debate about pay and benefits at Costco and other retail giants.

The viral video, which has over 423,600 views and was posted by TikToker and Costco worker Naomi Samaniego (@naomi_samaniego80), shows the worker in uniform with a name tag stating she has been employed at the company since 2007.

“When you make $29+hr and every six months bonus,” the TikToker captioned the video.

The video sparked controversy over the salary, with users speculating if it was true and debating whether working at Costco was desirable or not. Some users compared Costco’s pay to other retailers and praised its employee benefits.

“Health insurance for the whole family, 401k, floating holidays, PTO. They sent us flowers and an engraved piggie bank when our daughter was born,” one user shared.

Costco is known for receiving praise for its employee pay and benefits. Costco has raised its minimum wage over the years, and in 2021 it bumped up to $17 per hour, according to CNN. For comparison, the U.S. Bureau of Labor Statistics reported the typical salary for cashiers in the United States in 2011 averaged around $13.11 per hour.

In addition to regular raises and bonuses for tenure, Costco also pays time and a half on Sundays and offers paid time off which also increases with tenure, according to Mashed.

Uniquely, Costco also says on its website that all employees, regardless of if they are part or full time, are eligible for benefits including health insurance. Costco also provides 401K contributions and a free executive membership to the store, which includes rewards, discounts, and free roadside assistance for vehicles enrolled in Costco’s auto insurance, according to Fox.

Regardless of the benefits, some users in the comments section of the viral TikTok were quick to criticize the company, alleging that employees do not have the ability to pick their work schedule and have issues with corporate management.

“Yeah but managers treat you worse than the ground they stand on,” one user accused.

“At Costco you can’t call off on weekends,” another argued.

Many viewers pointed out that Costco workers are often required to start out in cashier or cart-pushing positions earning the company’s minimum wage and only advance after years of tenure.

“You only get paid that much after about 7 yrs of working there,” one viewer commented.

Still, many users continued to share their personal, positive experiences with the company.

“I loved working for Costco, but I did leave for a better job. But it’s a great company in my opinion,” one user praised.

The Daily Dot reached out to TikToker Naomi via TikTok comment and to Costco via media request form.