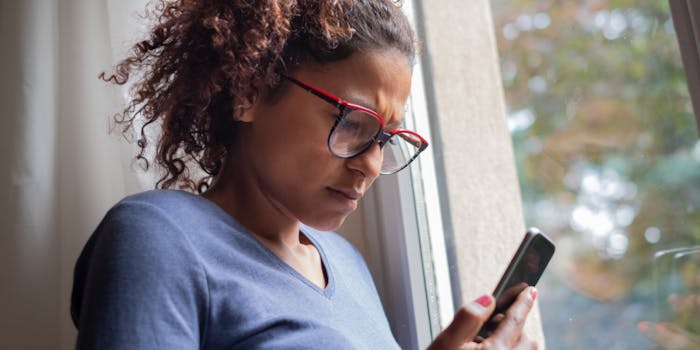 Coronavirus has left this mom stranded away from her young children

'Come out of the phone, Mommy.'

“Come out of the phone, Mommy,” are the first words 35-year-old single mom Adanna hears every time she talks to her 2-year-old son via WhatsApp.

The pair have video chatted nearly every day since Adana left Trinidad and Tobago—an island nation in the southernmost part of the Caribbean—in January. She expected to spend only the semester studying at the International Training Centre of the International Labour Organization in Turin, Italy.

Her decision to travel across the globe to study was prompted by her desire to be able to provide a better life for herself and her two sons, who are 2 and 7 years old. But due to coronavirus outbreaks, Adanna is stuck in Europe with no idea of when she’ll be able to return.

“It’s his way of asking, ‘Am I ever going to really see you again?’” she explained of her toddler son’s demand for her to spring from the digital world into his reality thousands of miles across the globe.

Her eldest son has been equally concerned.

“He burst into tears after I explained that the coronavirus outbreak would make it more difficult to get home,” she told the Daily Dot. “He kept telling me that he didn’t understand why this was happening.”

Adana, who chose not to share her last name for privacy reasons, also uses tech to make sure her oldest son remains focused on schoolwork.

“His school uses Google classroom, so I monitor what he does from here, like feedback from his teachers, mistakes he may make and his homework,” she said. “In that way, I can support him from here.”

Back in Trinidad and Tobago, the boys are under the care of Adana’s parents, but they continue to ask when mom will come home. Promises of a May return initially quelled their anxieties, but with many countries extending border lockdowns, it’s unclear when Adana will be able to get back to them.

Italy was one of the worst-hit European nations by the coronavirus. By Friday, the country had reported over 223,000 cases and 31,000 deaths from the virus, prompting strict measures to curb its spread. In early March, much of the county was put on lockdown. Not long afterward, Trinidad and Tobago closed its borders with no indication as to when they will reopen.

Adanna is not the only parent indefinitely stranded without her kids due to the coronavirus. In March, more than 13,000 U.S. citizens were stuck abroad, according to the Hill.

Mark Cook, a lifelong New York resident and basketball coach who lives with his 22-year-old daughter, took a business trip to the Caribbean and was scheduled to return to the city right before the pandemic gripped the world.

On March 22, Cook was notified that his return ticket was refunded because global lockdowns made international air travel impossible.

“The first thing I did was call my daughter and tell her I was probably not going to see her for a while,” he told the Daily Dot.

Then reports of family members coming down with the illness came flooding in.

“I found out that my cousin Ralph was in the hospital after a family member reached out on Facebook Messenger and explained that he was admitted because of the coronavirus,” Cook said. “Then I found out my aunt also got the virus.”

Not long after those bombshell social media reports, he saw a gut-wrenching video of bodies disposed of in front of Brooklyn hospital, right around the corner from where his daughter still resides in their Fort Greene apartment. Watching the video, he felt overwhelmed.

“Hospital workers were lifting bodies into a truck with a forklift,” he said. “You could just hear the fear in the guy’s voice as he tried to explain what was happening while recording.”

Unemployed and with no clear answer of when he would be able to return and resume working in order to pay the bills, he also feared his daughter could become homeless or be exposed to the virus while venturing for groceries in one of America’s hardest-hit cities.

According to data published by the NYC Department of Health and Mental Hygiene, the city’s low-income areas have borne the brunt of the impacts of the ravenous illness. By Friday, New York state reported 348,000 confirmed cases and over 27,000 deaths from the virus.

“I really have no control over it,” Cook explained by phone. “I just worry about her safety.”

Cook often calls his daughter via WhatsApp to make sure she’s updated on how the situation is progressing in the city and to warn her to be extra vigilant.

“I know that the economy is getting bad, and people do desperate things when they are desperate,” he explained. “With my daughter being alone, I know she can be perceived as an easy target, so I just keep pestering her to be careful when venturing outside.”

His daughter, Sonja, complains of boredom but is grateful to be able to stay connected to friends and family with FaceTime. A couple weeks ago, a family member gave birth to triplets, and it’s the only way she has been able to meet them.

“It sucks having to see my baby cousins through FaceTime, but we won’t be inside forever,” Sonja told the Daily Dot. “I’m grateful to be able to connect with everyone right now, especially my dad because he is away. I can’t imagine that I would’ve had to buy phone cards just to call before, like how people used to in the past.”

Despite her father’s frequent safety warnings, she remains optimistic.

“We’re New Yorkers, we are as tough as they come and we’re going to get through this,” she said.

For parents like Cook and Adana, technology is the only bridge connecting them to their children to dull the pain and anxiety of not being physically present to comfort and protect their children.

The importance of the internet came into sharp focus for Cook when he forgot to pay a bill.

“I got an email from Verizon informing me that the internet had been cut off and my heart started racing,” Cook said. “That’s the one thing that’s helping me to hold myself together—that I’m able to see [Sonja’s] face, hear her voice. A few years ago, I would’ve only been able for her to talk to her on the phone, and I know for a fact that wouldn’t have been enough. I would’ve been even more worried and anxious.”

“My phone has helped to keep me sane because I get to connect with people,” Adana said. “I could not imagine not being able to see my kids and talk to them on a video chat.”

Video chats and phone calls help ease the emotional toll of separation, but the question of when these parents will return home still lingers. They also fear what will await them when they return. An economic downturn is riding the heels of the coronavirus wave, and quarantine rules that will likely force travelers to remain apart from loved ones for two weeks upon return.

“When I explained to my eldest son that I would have to quarantine for two weeks even after returning, I know it hurt him a lot,” Adanna said.

For now, the parents have only tenuous digital connections to their children—and the dreams of returning home.