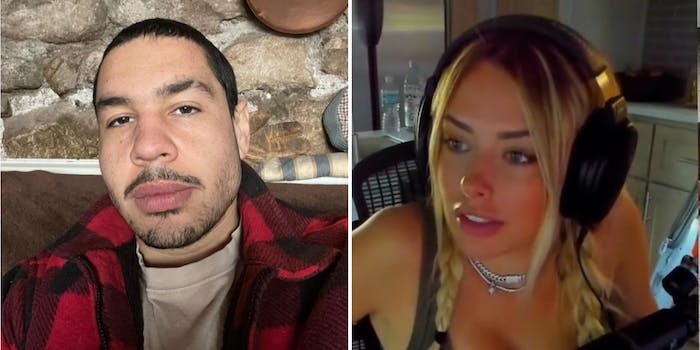 ‘Can’t believe that men talk like this’: Corinna Kopf’s co-host forgets to mute his mic while making thirsty comment about her

‘Dude has never spoke to a woman.’

Twitch streamer Greekgodx is facing criticism on TikTok after a viral clip circulated of him making sexual comments toward influencer Corinna Kopf after saying he forgot to mute his microphone.

The viral clip, which has over 6.6 million views and was re-posted by a Corinna Kopf fan account (@daddycorinna), shows footage of Kopf on a Twitch stream speaking with Dimitri Antonatos, aka Greekgodx. Off-camera, Antonatos is heard making seemingly unsolicited sexual comments about Kopf, who is wearing a low cut shirt.

“On what?” Kopf responds.

“Oh fuck, I thought I was muted. My bad,” Antonatos replies.

Kopf then asks Antonatos who he thought he was talking to. Antonatos avoids the question, stumbling over his words.

greekgodx forgets to mute his mic while talking to corinna….

Antonatos is a gamer and Twitch streamer with over 1.5 million followers, who has been known for getting into drama with other streamers like Pokimane, Mizkif, and Hasan Piker, according to Dextero. Corinna Kopf—who is infamous for her involvement in David Dobrik’s Vlog Squad—is a streamer, influencer, and OnlyFans creator with over 11.5 million followers across Twitch, Instagram, and TikTok.

The viral clip originates from a stream on Kopf’s channel filmed yesterday, which is still available on her page. The two gamers are playing virtual slot machine games together, with both streamers telling explicit sexual stories and making sexual jokes together.

Around 53 minutes into the full-length stream, Antonatos makes the comments seen in the viral TikTok clip. Another man in the video asks Kopf, “Are you purposefully showing your tits?

Kopf seems unphased by the comments, and says in response: “I didn’t even know I had boobs to be honest.”

However, many users in the comments section of the viral TikTok were disturbed by Antonatos’ behavior.

“Dude has never spoke to a woman,” one user commented.

“I honestly can’t believe that men talk like this,” another responded.

Fans of Antonatos flocked to his defense, claiming the comments were funny or justified because Kopf is an OnlyFans creator and friend of Antonatos.

Antonatos and Kopf have had a public friendship together online for years—demonstrated by one YouTube video posted last year by Antonatos titled “We Made Corinna Kopf Jealous” where a group of streamers, including Antonatos and Kopf, discuss sexual topics.

Another video posted last year by Antonatos titled “Greek & Corinna Kopf dating?” includes footage of the two joking about dating each other, and Antonatos making sexual inneundos about “giving it to her” in a video game.

The Daily Dot reached out to Antonatos and Kopf for comment via email.