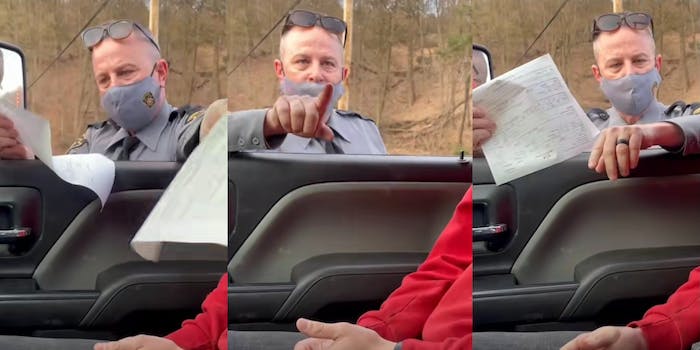 ‘Bit of a power trip’: Video shows cop threatening to give TikToker a second ticket for being a ‘smarta**’

A traffic cop threatened to give a driver a second ticket for “being a smartass” after pulling him over for allegedly speeding.

A TikTok video of the encounter, uploaded by @workingman330, shows the cop giving the TikToker an initial speeding ticket. In the caption of the video, @workingman330 claims he “was going 70 but got pulled over for going 85.” After receiving the speeding citation, the driver asks the officer his name, to which the cop says that it’s “right on [the ticket].” After a beat, the cop tells the driver to wait because he was going to “give [him] another ticket for being a smartass.” He points to the driver’s camera and says, “If you want to keep playing games, we can play games.”

“I gave you a chance,” the officer claims. “I was very polite to you. I was gonna reduce it, but you decided to be argumentative.

He then gestures to something on the driver’s rear view mirror—which the driver later said in the comments was an air freshener—and told the driver he wasn’t allowed to have it there. He then says if the driver “wants to remove” the item, he “won’t cite” him. The driver takes the object off his mirror, and the officer says, in a seemingly sarcastic tone, “Thank you for being compliant this time.” The officer then steps back from the car and the video ends. It’s unclear where the incident took place or which department the officer works for.

The video has been viewed 8.6 million times and liked nearly 850,000 times since being posted on April 6. Many viewers took the video as an example of police officers abusing their powers.

“Lmao why do cops think they’re God,” one person quipped.

“A video showing an officer saying ‘going to give you a ticket for being a smartass’ should be plenty to get all charges dismissed,” a TikToker wrote.

“Record every interaction with law enforcement,” another user commented. “Never let their lies be the only thing the judge hears.”

Some users were quick to defend the cop, accusing @workingman330 of cutting out parts of the video that may have shown him being disrespectful.

“People side with the driver but don’t see the whole story before this video too,” one critic said. “Not picking sides just using logic.”

In a reply to another critical viewer, @workingman330 said he was “very respectful” to the cop, but asserted he was going 70 mph. “That’s all he would let me say,” @workingman330 claims.

In a second followup, the TikToker said that he would go to court to fight the ticket.