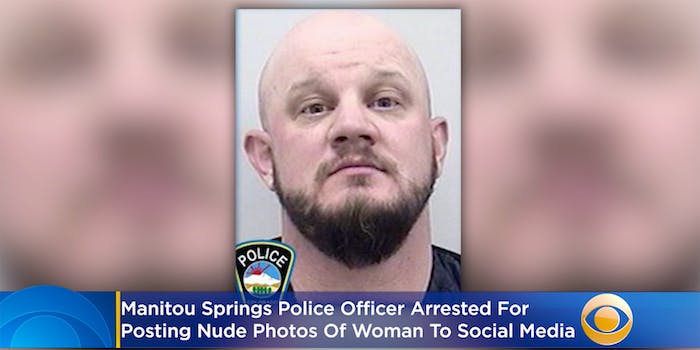 According to reports, this wasn't this police officer's first run-in with the law.

A 41-year-old police officer was arrested by Colorado Springs police last week after posting nude photos of his ex-girlfriend to his Tumblr account.

Jacob Carley, an officer with the Manitou Springs Police Department, was arrested on suspicion of posting a private image for harassment, according to an article in the Gazette, the newspaper serving the Colorado Springs area.

According to Carley’s ex-girlfriend, who filed the complaint leading to the arrest, she’d shared the photos with him while they were dating, but they were meant for him exclusively, and she feared she would lose her job as a result of the photos being published online.

Carley maintained that he decided to post her photos one week after they had broken up, because, as he told police, he thought she was “hot.” He also claimed he believed she couldn’t see the photos because she had since deleted her Tumblr account.

While he said he did not know he didn’t have permission to post the photos, he was unable to produce any proof of consent allowing him to share them online.

The Gazette reported that Carley was placed on administrative leave Tuesday, according to a statement from the city of Manitou Springs. Carley has been a police officer there since December 2018.

Denver’s CBS affiliate, KCNC-TV, noted that the crime Carley’s being charged with is a Class 3 Misdemeanor. That station’s reporting also uncovered that Carley was sentenced to probation for assault cases in 2013 and 2015, both occurring in Northern Colorado.

The video of the CBS report was posted to the Reddit r/Bad_Cop_No_Donut subreddit, dedicated to “law enforcement abuse stories regarding abuse of power, corruption, and other misfortunes in developing police states.”