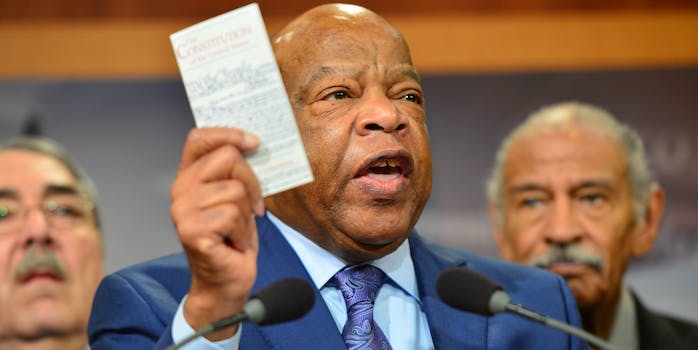 Congress calls on FBI to find 22 missing teens of color in D.C.

Activists worry #MissingDCGirls could be victims of sex trafficking.

For weeks, activists have been concerned about the 22 children and teens of color in Washington, D.C. who have been missing since February. Now, Congress is calling on the Department of Justice and FBI to take on the cases.

After members of the Congressional Black Caucus learned about the situation—which has been discussed on blogs and social media but rarely picked up by the mainstream media—they penned a letter on Tuesday asking for the federal government’s help in finding the 22 missing youths.

The letter called upon the FBI and Justice Department to “devote the resources necessary to determine whether these developments are an anomaly or whether they are indicative of an underlying trend that must be addressed.”

The Root‘s Yesha Callahan reports that a town hall meeting was held in D.C. on Wednesday, with black citizens pressing the district for answers. “But of course, in a city noted for its rising gentrification, there was not one white face in the crowd,” Callahan said.

By Friday, #missingdcgirls was trending on Twitter, with many pointing out the hypocrisy involved in these cases. While constant media attention is given to white children and teens when they disappear—from entire Dateline episodes to segments on Good Morning America—Twitter is often the only source to learn about the missing teens of color.

“14 black girls go missing in 24 hrs and I have to rely on Black Twitter to get info ’cause mainstream media’s too busy to care,” activist Shalisa Hayes said on her account.

Now raise your hand if you know who Tamika Huston is and could identify her face. Tamika disappeared almost a year to the day before Natalee

But they sure are quiet as Black women disappear from the same city.

My thoughts exactly……! @DCPoliceDept we've got to do better! #MissingDCGirls pic.twitter.com/vfJqlaRLaq

In her piece for the Root, Callahan says she is concerned that there may be a trend to the teens’ disappearances, citing a 2013 story in which a D.C. police officer was arrested for running a teenage prostitution ring. Human trafficking remains a major problem in both the district, as well as the country at large. According to the Exodus Project’s executive director, Roxie Farrow, D.C. teens are aware that sex trafficking is an issue in the city, and it’s a subject of conversation throughout school systems.

“Our children are talking about it. Every time we have a workshop in our schools,” Farrow said, according to the Root.