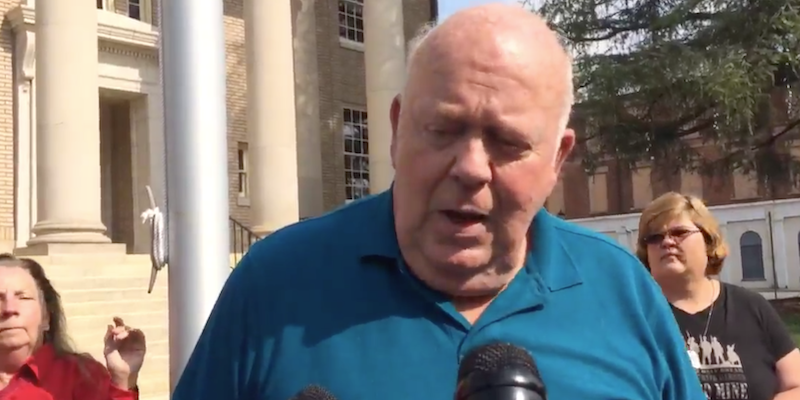 Walker sued York’s government in order to return the Confederate flag to the town’s courthouse. During an interview with the press over his case, Walker argued that the Confederate flag isn’t a symbol of racism or slavery, and that the flag’s meaning is just a matter of perspective. But while comparing the flag to streets named after Martin Luther King, Jr., Walker used a demeaning racial slur to describe King.

After correcting himself, Walker proceeded to say that he “doesn’t agree with” naming streets after Martin Luther King, Jr., but refuses to try to rename those because “that’s the way it is.” Still, he fears protests against Christopher Columbus monuments will lead to statues of the Founding Fathers being removed.

“When is it gonna end?” Walker argued. “We’re gonna go after Washington, Lincoln, Jefferson, and everything else.”

For now, Walker’s plans to reinstate the Confederate flag have been shot down. Cho reports that his lawsuit was dismissed, with the hearing lasting less than 30 minutes. The internet has since lambasted Walker, pointing out that the Confederate flag has no place on government property, and that his Freudian slip might be a subtle indication of his real political views.

All of these racist white folks in the south want to keep flags and statues of a war they lost. That's just embarrassing to be honest

In addition to dropping "coon," notice he's also parroting Trump's "are we going to go after Washington or Jefferson" argument.

Others argued they would love to see statues for Christopher Columbus and America’s racist Founding Fathers taken down, citing their sanitized racist and violent pasts.

Colombus the genocide king, has to go too. Take him down.

Confederate memorials have since faced harsh scrutiny in the wake of a deadly white supremacy protest in Charlottesville. Over 20,000 protesters have signed a petition to replace a Virginia Confederate monument with a statue to Missy Elliott, and Baltimore has quietly removed their own Confederate memorials overnight. While Confederate statues have never been popular with progressive activists, municipalities are increasingly scrapping theirs—or facing vandalism from protesters who want the monuments taken down.