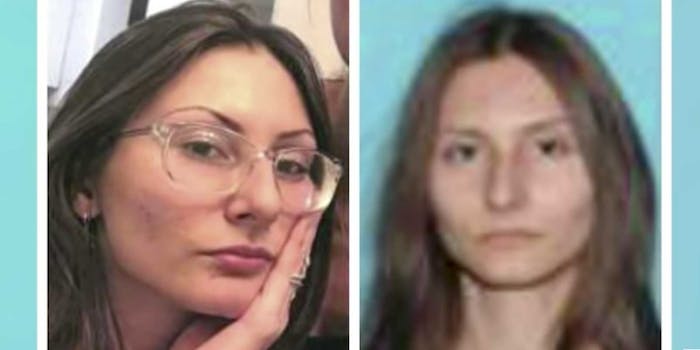 The manhunt for a potential killer is not funny.

On Tuesday, police in Colorado released the photo of a woman on the run who they said had made “credible” threats, purchased firearms, and was “obsessed” with the Columbine school shooting. The FBI manhunt for 18-year-old Sol Pais, a white woman who was considered “extremely dangerous,” led to schools around Denver putting students on lockdown.

She is a white female, 18 years old, approximately 5'5" in height, with brown hair. She was last seen wearing a black t-shirt, camouflage pants, and black boots. She was last seen in the foothills of Jefferson County 2/3 pic.twitter.com/jHOqqTUjFE

However, some people online were less concerned with locating a violent threat and more interested in commenting on the suspect’s looks. For many on Twitter, it was her wrinkles that were the scariest thing about her, because the worst thing a woman can do is not look youthful and lie about her age, as opposed to, you know, shooting up an entire school.

18? Those years have not been kind.

Meth and Fox News will add a couple decades to your head.

On Wednesday morning, the manhunt for Pai was over. Search and SWAT teams found her in a forest in Clear Creek County, Colorado. She is dead, but authorities have not yet released the specific circumstances.

Dean Phillips, FBI special agent in charge, said Pais traveled from Miami to Colorado and had “made some concerning comments in the past.” He also said she was “infatuated” with the 1999 Columbine high school shooting, which will mark its 20th anniversary on Saturday, and added that after leaving the airport in Colorado, she bought a pump-action shotgun and ammunition.