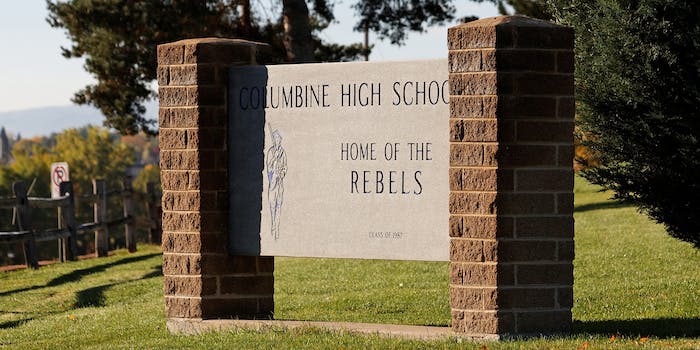 On this Columbine forum, questions will never be answered.

Columbine is normal now. The archetypical school shooting shook the nation to its core back in 1999, but today, after so many senseless massacres—Virginia Tech, Sandy Hook, Orlando, and now Ohio State University—it’s strange to think that there was a time when something like Columbine felt unique.

For the uninitiated, here’s the mythology: Two boys motivated by depression, narcissism, and (at least in one of their cases) psychopathy form a mutually bound fatalistic partnership that culminates in a years-in-the-making attempt to blow up their Colorado high school. When their bombs fail to go off, they spend half an hour executing 13 classmates and one teacher, and injuring 21 others, before killing themselves.

Over the years, there has been a remarkable amount of investigation and analysis committed to Columbine. The journals of killers Eric Harris and Dylan Klebold are available for anyone’s macabre inquisitiveness, as are the transcripts of the so-called “basement tapes”—the VHS recordings the boys made in the immediate run-up to the crime. Dave Cullen published an award-winning, deeply reported history in 2009, and the lengthy FBI investigation is available for public consumption. In 2007, an official memorial was dedicated outside the high school, and the library—where the most brutal killings occurred—has been torn down and rebuilt.

However, not everyone is convinced that all has been sorted out. On the Columbine High School Massacre Discussion Forum—a plain, weightless, yellow-on-black HTML page—the permanently fascinated are still digging through the rubble. There are countless forums on the internet dedicated to narrow communities —like say, this directory for the obscure board game Condottiere—but the Columbine forum is remarkably active. There are over 20,000 posts on the “Thoughts on the Shooting” subforum alone, with new comments trickling in every day.

Some of the threads are about as banal as you might expect. There’s a lengthy sticky post called “Songs that remind you of Columbine,” which mostly serves as a place for the faithful to make weird little totemic pledges to their compulsions. “‘Bright Eyes’ by Art Garfunkel. It makes me think of how Eric and Dylan wondered what the afterlife would be like,” writes user WendlaBergman.

But the majority of the community is fixated on the idea that there’s still something left. Society has packed up its gloomy curiosity and looked toward more clandestine crimes, but the people here still believe that a fateful morning in 1999 holds tantalizing mysteries.

“I sought out the forum firstly to see if there was anyone else out there who was as ‘obsessed’ with Columbine as I found myself to be,” says a 32-year-old from England who regulars the forum as ‘Silmo.’ “I’d read all the books available on the subject and found inaccuracies in some of them having gone through the 11,000-page police report. I wanted to speak to others who knew a lot about the topic and check if they agreed with my thoughts that some of the so-called experts who had written these books were actually wide of the mark.”

Silmo’s primary target is the aforementioned Cullen, a journalist who covered Columbine firsthand and who Silmo believes paints an inauthentic portrayal of the tragedy’s causes. Cullen determined that Harris was a classic psychopath motivated to kill by a general antipathy for the human race. The forum prefers the alternative narrative that Klebold and Harris were depressed social outcasts constantly bullied by an elite varsity class. It’s the same plot that surfaced in the immediate aftermath of the attack, and it generally paints the killers as hosting a more sympathetic rage.

“I’ve been away from the board for a while, and I can’t come back right now, but I’ll toss out this question: Is the general consensus here still that Cullen is wrong when he insists that Eric was a psychopath and Dylan was his cowering little emo sidekick?” writes LPorter101, in a thread commemorating the anniversary of ‘Cullenbine.’ “I hope so. Because he is.”

“Cullen is wrong, but it baffles me how he can stick with his story for so long, even tho a lot of people have called him out for his bs,” responds user BornToKill.

It’s hard to identify why Cullen’s vision innervates so much outrage. Perhaps those in the forum feel a sense of kinship with the outsider narrative, or maybe they just believe they can understand Klebold and Harris better than those of us who haven’t put in the work. But these are people who get a sense of belonging from digging through Columbine facts and analysis. They call themselves researchers. The idea of an interloper showing up and offering conclusive answers takes the fun out of the game.

“Everything about Columbine just seemed to go endlessly into fine details, and finer details are something I like,” says a 19-year old New Zealander who posts on the forums. “The members and content has helped a lot. As I grew up, Columbine became less of an interest and more of a talking point. There are great people on the board, people who I can relate to and talk to without the pressures of what I look like, who I am, and what I believe. I guess just people with similar mindsets.”

Technically, the Columbine forum isn’t the only community fixated on the massacre. If you go to Tumblr, you’ll find hundreds of fan pages maintained by “Columbiners.” Generally, they’re young, teenage girls who produce fan art and (yep) memes inspired by their impressions of Harris and Klebold. The Columbiners share the forum’s distaste for Cullen’s history (Cullen himself says he hears from Columbiners “daily” on his Twitter account), but the ideologies are different.

“There are people who call themselves ‘Eric and Dylan fans.’ These people disgust me,” says Silmo. “It tends to be younger girls who fall into this category. There are some older people who seem to prefer to claim to have sympathy for Eric and Dylan rather than claim to be fans.”

In many subcultures, fangirls always get buried by the more masculine, serious disciples. From mass-murder to the Beatles, there will always be those who think their fascination is more legitimate. The politics of defining when and where your interest in a decades-old bloodbath becomes ignoble is not an exact science, but the Columbine forum has done its best to draw the line between us and them.

“I am a researcher and I regret every day the actions Eric and Dylan took—this would be a rare sight on Tumblr,” says the New Zealander. “People obsess over the two killers on Tumblr, whereas I obsess over all the small details that just make the whole thing interesting, not because I think Eric was a total cutie.”

Even those who disparage Cullen’s edict admit that there aren’t many big questions left about Columbine, but the community does its best to lock onto a few dangling threads. The Harris family has never formally held a public interview, and a couple of documents are still sealed in police precincts. That might not seem like much, but when you’re committed to examining the diets and musical tastes of two teenage killers, anything small can seem huge.

“Recently, a YouTube channel figured out that Eric and Dylan can be seen on the security tapes, something which even police never found out in their investigation,” says the New Zealander. “Picture the whole thing as a puzzle, each little piece makes up the image, you already know what the picture is but you still want to finish it.”

“There isn’t much left to analyse really that hasn’t been done already” says Silmo. “There’s the basement tapes, which most researchers would like to see for themselves, but that’s not gonna happen anytime soon. I think it’s all down to the fact that we’ll likely never have all the answers we seek. There always seems to be a little bit of evidence or information that comes to light.”

Maybe someday Columbine fandom will officially die out, and the death cult predicted by the killers will finally subside. But not until the people on this forum find satisfaction. In that sense, they’ve set it up perfectly. It’s impossible to fully understand a massacre, and that’s what makes it so fun for them to try.