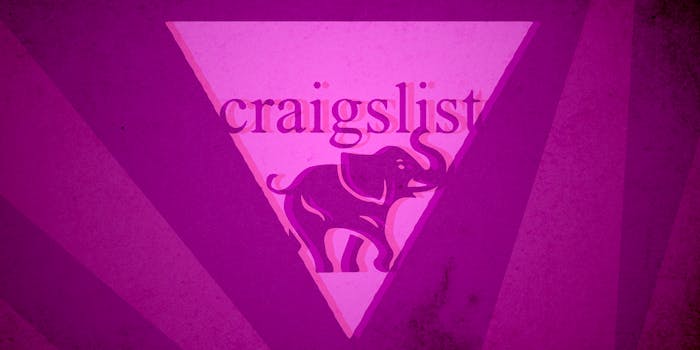 Welcome to the IRL section’s new sex column, “Close Encounters of the Casual Kind.” We pore over the Casual Encounters section of Craigslist as well as other hookup boards in order to find all of the ads that center around national events—such as the 4th of July, Winter Storm Jonas, the nation’s Pokémon Go addiction, and now, the 2016 RNC.

The 2016 Republican National Convention was full of surprises when it opened on Monday.

Starting with an unprecedented attempt at changing the party’s rules in order to oust presidential nominee Donald Trump, the floor of the GOP convention in Cleveland at times resembled a WWF ring or the catfight-centered set of the reality show Bad Girls Club.

And then there was all the kinky butt sex.

Each time there’s a national event that inspires another installation of the “Close Encounters of the Casual Kind” column, we run across more than a few cringe-worthy sex ads on Craigslist. But there’s something about the RNC-themed ads flooding Cleveland’s own Casual Encounters that is subversive and extra filthy.

Many of the Craigslist ads were written in sado-masochistic language, with a particularly competitive streak running through them. Locals and attendees were ready to use, or be used, mercilessly.

“You are visiting. You can act like the true bitch bottom you really are and the folks back home will know nothing,” wrote one domineering top who posted two consecutive ads seeking to fill some “little RNC holes.”

“You want to take a break from your delusions,” wrote the Topman. “I will host or travel. You will kneel and beg.”

Hopefully, the dominant dude was able to scroll down and find another the guy who introduced himself as an “Italian chub bottom” who wanted to be “used and abused by you and group during RNC.” The Italian stated that he was a fan of “throat finger fuck use dilldo’s” and “verbal abuse humiliate and degrade,” but only if the fun was “all good all man play,” thank you very much.

One local Cleveland gay man posted casually that he was up for a party: “If you have a couple people who wanna pound out a tight hole, I’m your dude.” After a scintillating description of his desired sex acts, the m4m ensured discretion with “I don’t suck and tell.” Which is important in today’s conservative GOP climate.

He wasn’t the only local who posted fantasies of being used by Republican delegates: A Westside resident offered himself to manly, anti-abortion visitors as a “RNC fucktoy.” But it wasn’t all Clevelanders trying to get some fresh meat while the pickings were plentiful—some guys were in town for the convention and figured it was a good time to find some “young ass” for a bit of discrete man-boy love.

Then there were the partisan ads. One “Democrat looking to suck Republican cock” stated that he was free all week. One even appeared to use the name of vice presidential pick Mike Pence as a verb, suggesting a game of “truly fudge Pencing with DL [down-low] Repubs.” We don’t know what that is, exactly, but it’s probably big in Pence’s gubernatorial empire of Indiana.

Another “athletic” and “bearded” m4m made his interests crystal clear: “I’m looking for GOP tops. I’m quite the opposite, a DNC bottom.” He noted the difference in tone between the two political parties as well.

“I like to assume GOPers are aggressive fuckers who just want to pound you into submission. I can live w that,” said the submissive, hairy Democrat. “Be assertive. Be verbal. Be the boss. Grudge fuck me.”

A secret cross-dresser looking for some lesbian action offered themselves as a “sissy 4 visiting curious Republican female.” Of the self-described “closet variety,” the gender explorer hoped that a harsh-yet-feminine lady might visit and “lure me into hotel and give me no choice but to submit to her demands.”

There were a bunch of relatively innocent ads for straight dates and people to show around town, too. But those were boring, so forget them. We also didn’t bother to look at dating sites, Reddit boards, or Grindr—because after reading through countless kinky Craigslist ads, it’s pretty obvious that everyone at the 2016 Republican National Convention is just trying to plow some man-holes. Or get their own man-holes plowed in return.