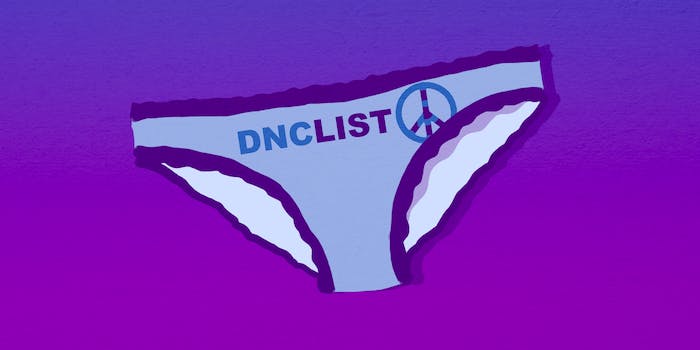 Close Encounters of the Casual Kind: Women were on top at the DNC

Sometimes it takes a village to get your rocks off.

The 2016 Democratic National Convention was historic on multiple levels. Not only did the Philadelphia gathering of delegates nominate a woman to a major political party’s presidential ticket for the first time in history, the DNC also drew record numbers of LGBT delegates and people of color—which was reflected in the most diverse lineup of speakers ever.

Perhaps all this progress is part of what inspired locals and visitors to fantasize about sex with dominant women, worshipping Democratic asses, submissive foot play, and of course, tons of gay and trans hookups.

It all takes place online, where once again Craigslist’s Casual Encounters section provides a revealing glimpse at America’s kinks and desires during the nation’s major events. Adding to our previous “Close Encounters of the Casual Kind” coverage of the Republican National Convention’s man-on-man horseplay, Pokémon sex, Fourth of July fireworks in the bedroom, and snow-plowing during Winter Storm Jonas, this is your guide to putting the “D” in the DNC.

This year’s celebration of the Democratic Party kicked off with a little naughty aisle-crossing. One “Republican looking to worship DNC lady’s ass” posted on July 24, a day before the convention officially opened its doors to delegates. The man expressed a special interest in “MILFS and BBWs” who thought it would be “extra fun to have a GOP supporter kissing your ass.” He may lean to the right politically, but it sounds like his motto is #ImWithHer regardless.

The unprecedented number of transgender DNC delegates (28) and the first-ever transgender woman to speak at a major party convention (Sarah McBride) may have inspired a little extra love for gender nonconforming sex partners. Ads marked m4t (man for trans) were abundant, and one posted Monday appeared to be placed by a journalist: “In town covering DNC-Hosting any cd/sissy/fem/twink.” That particular fantasy involved a direct transaction with marijuana and genitals: “U blow me (been told my dick is beautiful) & if you have some weed, I’ll suck your dick.” Reciprocity: It’s what makes democracy great.

Another ad placed by a “passing FTM kinky dude” sought a “total top” to help him get through the stress of the DNC. The female-to-male trans guy explained that he was “so busy during the day here at the convention but need to be fucked hard and rough when I’m not busy.” Understandable.

Not everyone was turned on by the great moment in feminist and LGBT history that was the DNC. One ad submitted by a frustrated “Bernie Buddy Seeking F Bernie Conventionist” wanted to skip Bill Clinton’s speech and chill at his hotel. He wrote: “Very un happy about Hillary..Desire Nice Looking Female any size with same feelings” to “Express our full dis satisfaction.” Hey, when your candidate loses you may as well f*ck the pain away.

The undisputed winner of this year’s Democratic National Convention sex ads, though, was the one that started out with a touch of romance: “Hillary, will you be mine tonight?”

And that’s where the romance ended. This inventive South Philly local sought a serious Hillary impersonator—pantsuit a must—to get it on while simultaneously engaging in a “full dialogue during sex involving Monica, shaming Bill, and full on political discussions of Benghazi during sex.” Hillary impersonators ready for a little wonky roleplay were invited to even bring along a Bill Clinton—but only if he stood in the corner, fully clothed, and didn’t talk.

Luckily, the poster promised that “the private email servers or Bernie Sanders will not be brought up.” Phew. We were all dressed and ready to go, but that’s where we draw the line.

Read all of the Close Encounters of the Casual Kind columns here.