How hard is it to find abortion access in Texas? Play this video game

Choice: Texas aims to combine role-playing games and the fight for abortion access.

In the past few months, Texas made national headlines for its organized fight against an abortion bill that would severely limit women’s access to medical care and make it more difficult to obtain an abortion. Social media played a crucial role in getting people to think and talk about the issue in a more interactive way, and in the process, we found crusaders and whistleblowers. Now, two women are taking the issue into the realm of gaming.

Choice: Texas is a role-playing game about abortion access, and it’s currently being crowdfunded via Indiegogo, with a goal of $9,250. The mission: Players will choose women of different socio-economic and geographic backgrounds and participate in the experience of accessing an abortion in Texas, factoring in health insurance and legal access. Carly Kocurek, co-creator of the game, had the idea long before this summer’s battle.

“I actually got the idea for an abortion access RPG about a year ago,” she told the Daily Dot. “I was thinking about how different aspects of someone’s life determine their level of access, and then when I was playing a pen-and-paper RPG, the character creation process really resonated with what I’d been thinking about.

“But, I kept thinking about it, and it never quite gelled at a game-design level. I couldn’t make it feel the way I wanted it to. Then, I started thinking about Spent, and then Depression Quest came out, and the type of Web-based interaction used in those games seemed like a much better fit.”

Kocurek, who is currently an assistant professor of Digital Humanities and Media Studies at the Illinois Institute of Technology, then contacted an old friend, Austin writer Allyson Whipple, in January, and the two set about making Choice a reality. Kocurek says their game falls in line with other empathy games, where experience trumps strategy or gameplay.

“I definitely think it fits with those games. And I also think of it as very much linked to the history of interactive fiction, including Choose Your Own Adventure books and things like that.”

“I’m not a politician, but my adult politics has been greatly informed by empathy,” she explained. “I had a fairly privileged childhood, and it wasn’t until I was out of college and really seeing the way the world worked, interacting with people from many different backgrounds, and witnessing firsthand the struggles that people had to face, that I developed my own views and became more politically active. Granted, not everyone’s mind is going to be changed by walking around in someone else’s shoes. But it does happen.”

Kocurek and Whipple then brought in illustrator Grace Jennings to give the game’s characters their look. They gave her details like age and occupation but let her sketch out the Texas women whose lives players will be shadowing.

“When Allyson and I started talking about the game, we decided it needed to have illustrations to really work,” Kocurek said. “Grace was the first person I thought of. Allyson liked her portfolio too, so we went with her. Allyson and I have worked together really closely to develop the characters’ identities, but Grace has really brought them to life.” 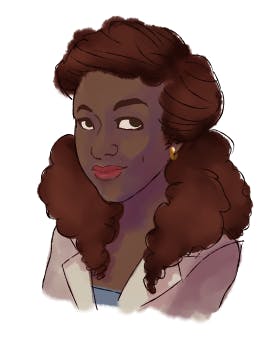 Earlier this week, Kocurek wrote on the gaming site Gamasutra about the balancing act of telling this story in a relatable way, while creating an engaging game:

“As we continue to work on it, we have found ourselves asking, again and again, if incidents are too traumatic or too grisly to include. But, I have played games in which I watched bodies disintegrated by explosions, ripped to shreds by animals, and impaled on spikes. I have, through games, been stalked, been assaulted, been murdered, been hit by a car, and fallen off a cliff.

“By comparison, the daily traumas women face should pale in comparison. And, regardless, life pulls no punches, neither should the games that try to make sense of it.”

There’s one month left to donate. Upon completion in February 2014, Choice:Texas will be available free on the Web.