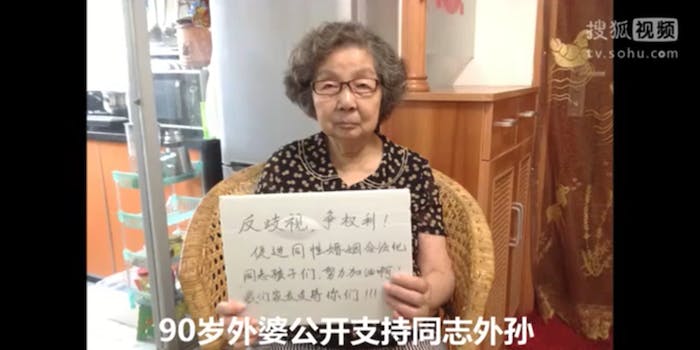 As Russia’s crusade against LGBT youth rages on, China is taking a different approach.

As Russia’s crusade against LGBT youth rages on, China is taking a different approach.

The Guangzhou-based PFLAG China produced this 30-second video, in which a 90-year-old grandmother holds a sign urging for the legalization of gay marriage in China. She goes on to say her grandson, an engineer in Fuzhou, is gay.

“I hope he finds a good boyfriend and lives a happy life, and I hope that the government supports him.”

According to the South China Morning Post, her 28-year-old grandson said his grandmother was more supportive than his parents after he came out last year, but “[t]his means she will have to deal with lots of pressure from strangers and relatives.”

The video has since gone viral, and in the comments, there are others speaking about their experiences as well. In February, parents of LGBT men and women wrote a letter to China’s National People’s Congress, demanding marriage equality.