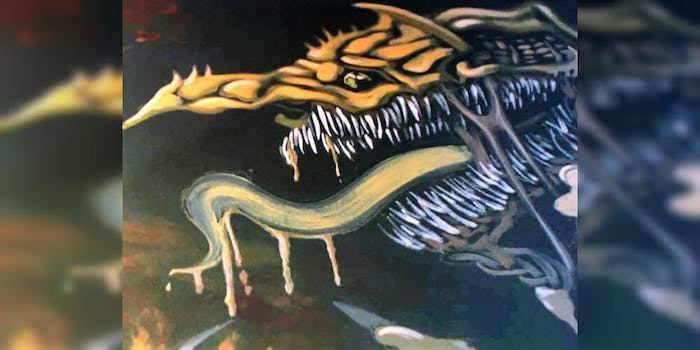 Netflix’s ‘Sabrina’ appears to have an art-copying problem (updated)

This happened with the first season too.

Another artist has come forward to say that Netflix recreated their art to use in The Chilling Adventures of Sabrina without contacting, crediting, or compensating them.

Shortly after the first season of Netflix’s spooky adaptation of Sabrina premiered in the fall, artist Joseph Butler spoke out on Facebook about seeing a repainted version of his work in the show. The Daily Dot interviewed him, and shortly after, he struck a deal with Netflix to license his art for that episode and future seasons.

Now,  Zach Smithson, an illustrator based in North Carolina, is saying The Chilling Adventures of Sabrina has done him wrong, too. He posted his original work alongside screencaps of the strikingly similar art that was featured in the fourth episode of the new season.

So in episode 4 of season 2 of ‘Chilling Adventures of Sabrina’ at 44:20, they did a paint over of my art. It’d be nice if #netflix at least contacted me about using it. #netflix #chillingadventuresofsabrina #theft #justhireme #illustration #zachsmithson

Speaking to the Daily Dot, Smithson said a friend recognized the art while watching the show and sent him a screenshot. “It was kind of bittersweet. A piece of art I made and really loved was prominently shown on a Netflix show. But also, my art had blatantly been taken and used without my permission,” said Smithson. “It’s frustrating because I have applied to art jobs with companies like them, and I’ve been rejected. Instead, my art was painted over and used by them anyway.”

Smithson created the digital painting in his free time in college while exploring his love of monsters and creature design, and hoped to use it in a larger project later. Verifying that the work is originally his, Smithson pointed to his Behance gallery, posted in 2014.

Smithson has contacted Netflix about the use of his artwork in The Chilling Adventures of Sabrina, and they are in talks. When the Daily Dot asked what he hoped would come from talking with them, he expressed almost the exact same sentiment as the artist Netflix plagiarized last season: They both just want artists to be paid and credited for their work. “I would hope that this would stop happening. There are so many great artists out there that have their art stolen and they aren’t credited or compensated,” said Smithson. “I would like to be compensated for use of my work, if they had contacted me first, I would have gladly worked something out with them.”

In addition to these two independent artists, Netflix also had to settle a lawsuit with the Satanic Temple over allegedly copying the Temple’s Baphomet statue.

The Daily Dot has reached out to Netflix for comment and will update the story with any response.

Update 7:02pm CT, April 23: Smithson told the Daily Dot that he was able to get in touch with a representative from Warner Bros. who was very helpful and understanding. According to Smithson, the representative explained that an artist who was commissioned to do work for the show had created the painting, and both parties were able to come to terms on compensation for the art and future licensing opportunities.