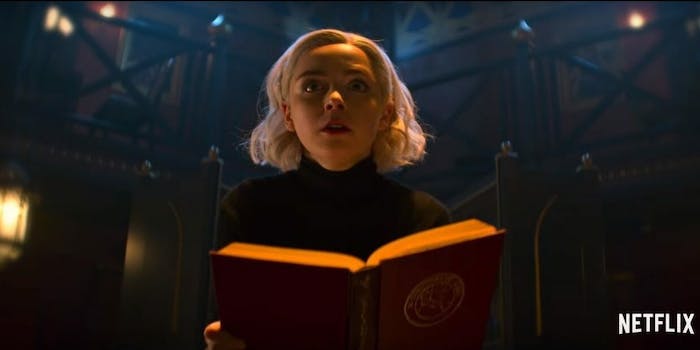 Sabrina lets her powers loose and gets a goth makeover in the new trailer.

We knew that Netflix‘s Chilling Adventures of Sabrina would return soon, but we didn’t realize how soon. According to the first teaser trailer for season 2, you only have to wait until April 5.

Netflix filmed the first two seasons back-to-back, which explains the fast turnaround. That means we’re likely to have a longer wait for season 3 (if indeed there is a season 3), but it makes sense for the story we’ve seen so far. Season 1 basically acted like a prologue to Sabrina’s career as a witch, introducing the main characters but mostly focusing on Sabrina’s internal conflict about whether to become a witch or stay in mortal society.

The season ended on kind of a cliffhanger, with Sabrina signing her soul over to Satan and seemingly joining the Mean Girl posse of teen witches at the Academy of the Unseen Arts. This teaser suggests she’s excited to go wild with her new powers—including doing the old Sabrina the Teenage Witch sitcom trick of changing outfits by magic.

Four months isn’t too long to wait, but even so, there’s still more Chilling Adventures on the way. The show will air a holiday special on Dec. 14, and we’ll have a spoiler-free review up for that next week.