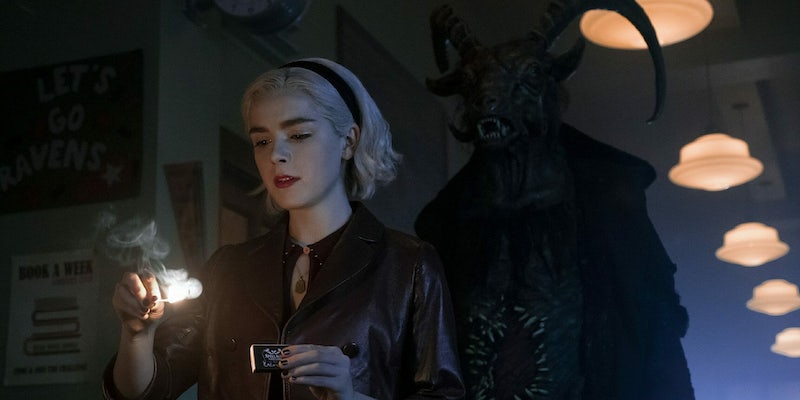 The Chilling Adventures of Sabrina/Netflix

‘The Chilling Adventures of Sabrina’ loses momentum in season 2

Like Riverdale, Netflix’s The Chilling Adventures of Sabrina is unabashedly silly. It takes place in a world where Satan personally interferes with the casting of a high school play, and where Dorian Gray is a bartender in a small American mining town. This nonsense worked well in season 1, especially when Aunt Zelda (Miranda Otto) and Miss Wardwell (Michelle Gomez) vamped it up as Sabrina’s witchy mentors. But The Chilling Adventures of Sabrina season 2 goes a little too heavy on the angst, sapping the show of its previous zany energy.

The Chilling Adventures of Sabrina season 2

RELEASE DATE: 4/5/2019
DEVELOPER: Roberto Aguirre-Sacasa
STREAMING: Netflix
With clumsy feminist themes and a more downbeat tone, ‘Sabrina’ season 2 takes a step back from the energy and humor of its first season.

Season 1 was a coming-of-age story, focusing on Sabrina’s choice between a normal mortal life and signing her soul over to Satan in exchange for magical power. The conflict between her magic and mortal lives continues in season 2, but the actual decision is over. Sabrina (Kiernan Shipka) chose to sign the Book of the Beast, becoming a full-time student at the Academy of Unseen Arts, a cross between Hogwarts and Gossip Girl. Her half-human heritage makes her an outsider, inspiring her to rebel against the often sexist traditions of the Academy.

Feminism is an obvious theme for Sabrina, a show that borrows most of its mythology from the era of the Salem witch trials. Ambitious and eccentric women were historically branded as witches for stepping out of line, and there’s already a ton of pop culture (The Craft, Buffy the Vampire Slayer) about young women using witchcraft to empower themselves. Sabrina season 2 repurposes this idea for a rather old-fashioned battle of the sexes, pitting Sabrina against the conservative doctrine of the High Priest of the Church of Night, Father Blackwood (Richard Coyle).

In theory, I love the idea of a cheesy high school drama about church reform. While episodic subplots follow classic teen tropes such as school dances, love triangles, and coming-out stories, the season-long arc sees Sabrina struggle with the discovery that witchcraft isn’t as empowering as she thought. Already beholden to Satan’s whims, she quickly learns that the Church of Night (and, by extension, the Academy) is openly sexist, following a patriarchal structure that mirrors the Catholic Church. But instead of doing something interesting with this idea, the show just makes Sabrina try to beat the boys at their own game. Mistaking teen rebellion for meaningful revolution, Sabrina aims to reform the church from within.

While Sabrina season 2 borrows the hallmarks of progressive teen activism, its politics are pretty old-school. Likewise, the world-building feels increasingly shaky. To tell a story about a Strong Female Character battling the patriarchy, the show portrays the Church of Night as cartoonishly sexist, with Father Blackwood backed up by a cadre of two-dimensional prep school bros. But this culture is also portrayed as totally devoid of racism and homophobia, presumably because other types of bigotry would get in the way of Sabrina’s white feminist empowerment arc.

The setting feels like it was engineered to create a specific type of Bad Man for Sabrina to defeat, picking and choosing which other types of oppression fit the story. While the show sidesteps the issue of racism (implying that racism just doesn’t exist in the magical world), it clearly bases its overall mythos on a combination of European fairytales and Christianity—all predominantly white, colonial traditions. Similarly, the Church of Night fully supports queer sexuality and polyamorous relationships, but during the Valentine’s Day episode, the show thoughtlessly pairs everyone up into straight couples to highlight the gender divide.

Hopefully, season 2 will conclude on a more subversive note, perhaps with Sabrina and her allies breaking away from the Church to gain some real personal freedom. (Netflix only released the first five episode for review.) But for now, Sabrina‘s political arc reminds me of the end of Harry Potter, where Harry essentially upholds the status quo that allowed Voldemort to flourish in the first place.

Alongside these ill-articulated feminist themes, the show suffers from shifting the main villain role to Father Blackwood. Instead of being a looming, godlike terror, Satan is now a recurring side-character in Sabrina’s life, which makes him hard to take seriously. The show also tries to make Miss Wardwell a sympathetic character, when she’s much better suited to being a slippery, melodramatic villain. She’s just not as entertaining in her low-key, conflicted role this season.

The Chilling Adventures of Sabrina season 2 isn’t a write-off, and fans will find plenty to enjoy. Still, it’s a bit of a letdown following the humor and energy of season 1. It falls into the familiar Netflix trap of running too long (these episodes don’t need to be a full hour!), and the show fared better when it didn’t take itself so seriously. Thankfully, since the first two seasons were filmed back-to-back, these issues may well be ironed out by season 3.