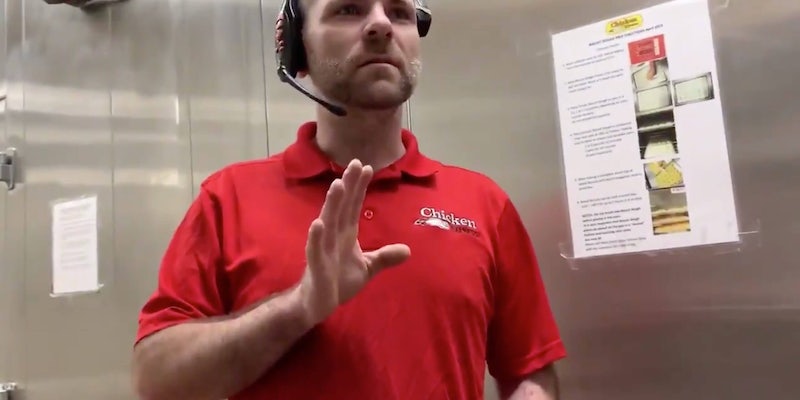 'Why should I take my hijab off so y’all can make money?'

A video that went viral on Twitter this week shows a white male manager asking an employee to remove her hijab during her shift at a Chicken Express in Fort Worth, Texas.

Stefanae Coleman, who goes by Folake Adebola on Twitter, on Monday shared a video showing her manager telling her not to wear the hijab.

The video, which has since been retweeted more than 8,000 times, starts with Coleman saying from behind the camera,  “When I’m not here, I’ll wear it…”

“OK that’s a different thing, that’s outside in your personal life,” the manager says. The Daily Dot wasn’t able to independently verify his identity. The Chicken Express store, which Coleman said is located on Blue Mound Road in Saginaw, Texas, was not reachable on Friday morning, and the company did not immediately respond when reached on Twitter.

“Basically he called the area coach asking could I wear it and she told him to tell me to take it off,” Coleman told the Daily Dot in a Twitter message.

“That’s a part of my religion so I just feel like if I work here, y’all would be able to accustom my religion,” she tells the manager in the video.

“Your job is your job,” he says, talking over her. “It has nothing to do with religion.”

“It says you have to follow the Chicken Express uniform policy and it lists out what it is, and it doesn’t involve anything else,” the manager says.

“I don’t know what to tell you,” Coleman says. “Y’all gonna have to fire me or have to send me home but I’m not gonna stop wearing it.”

In a follow-up video of a conversation that Coleman posted on her Twitter, the manager is heard repeating: “It has nothing to do with religion.”

“Why should I take my hijab off so y’all can make money? That doesn’t make any sense,” she’s heard saying in the video, which only shows the ceiling of the room.

“It has nothing to do with that,” the man is heard saying. His face is not seen in the second video. “The job requires a specific uniform and if that’s not part of the uniform, you as a paid employee cannot wear it.”

She left the restaurant after that. “I went and sat at a Subway and called a friend of mines who is also Muslim and just cried my eyes out,” she told the Daily Dot.

Coleman said she recently converted to Islam, and it was the first time the manager saw her wear a hijab. She said she hasn’t heard from the restaurant since the video was taken and currently isn’t working there. She hopes the restaurant’s handbook will be changed.

According to the Texas Workforce Commission, it is illegal in the state for an employer to ban an employee from wearing their religious clothing “except when the accommodation would cause undue hardship or safety concerns.”