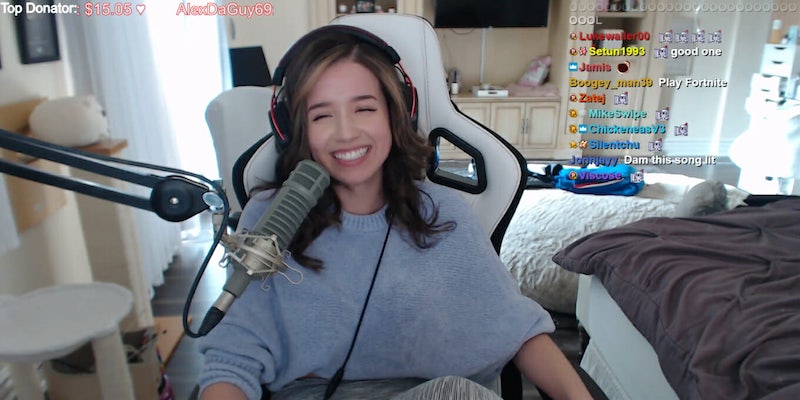 'His heart was in a good spot and his intentions were good.'

Imane “Pokimane” Anys, one of the top streamers on Twitch, is used to abuse from her viewers—and she doesn’t need male fans to fight her battles.

Anyone with upward of 3 million subscribers has certainly experienced some incivility online, and when it comes to the gaming community, women tend to end up targets. As the top female streamer on Twitch, and one of the top 10 streamers overall, Pokimane has a brighter-than-usual spotlight on her.

In a recent stream, the 23-year-old took a break from her usual “Just Chatting” videos peppered with League of Legends and Fortnite. Instead, she took a shot at the notoriously difficult Getting Over It with Bennett Foddy. In the game, players attempt to conquer a mountain using a sledgehammer and their own momentum. There are no save points, so if they slip players have the potential to lose all of their progress.

Like many players before her, Pokimane made solid progress only to go crashing back down the precariously constructed tower. In a well-earned rage that delighted her fans, she pounded her keyboard and screamed at the game. While many of her fans identified with the very human reaction, there were plenty who mocked the streamer for her display of emotion. Twitch has a reputation for housing toxic gamers, many of whom feel that the gaming world is not amenable to women.

In a follow-up stream, Pokimane discussed one response, in particular, that caught her off-guard.

“Somebody thought that, like, I legitimately felt like I was getting bullied,” she said. “They were like ‘Listen, I’m so sorry about everyone saying, like, I want you to know that I’m with you. By the way, like, at one part of the game there’s a jump scare, be careful.'” She described the fan as a “white knight,” and told viewers that she acted mad for the video, but wasn’t nearly as angry as she seemed.

“I just act mad, I’m not actually mad,” Pokimane said. “His heart was in a good spot and his intentions were good.”

She went on to describe the interactions she had with viewers, which the fan had misinterpreted as bullying, as “banter.”

Pokimane certainly didn’t need a “white knight” to step in, but she seemed genuinely touched that he did. On Twitch, where women are often treated as outsiders in the gaming world, it is not uncommon for men to think they are “saving” a woman by stepping in, when in fact they don’t need their protection. Pokimane could have taken the fan to task for insinuating that she couldn’t take care of herself. Instead, she approached the issue with humor.