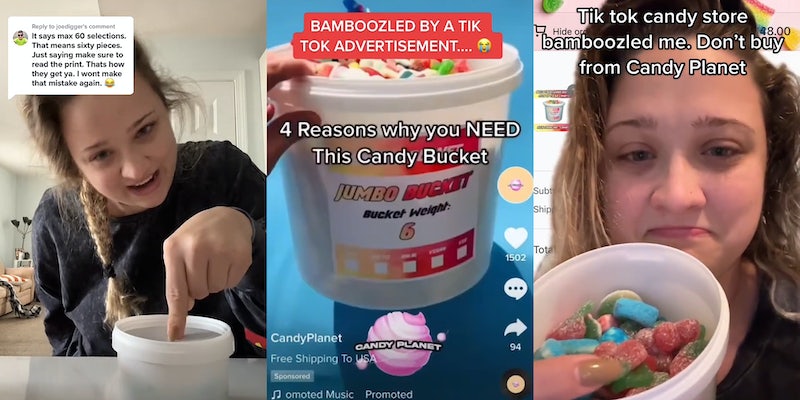 ‘I have been bamboozled’: TikTokers call out Candy Planet ‘bucket’ scam

The ad showed a 'giant-*ss bucket of candy.'

In addition to dupe headphones and questionable hoodies, there’s yet another scammy TikTok ad to look out for: a bucket of candy.

As detailed in a series of vireal TikTok videos by user Hope (@imurlasthope), an ad for Candy Planet has been circulating on the app, teasing a “candy bucket” for $51, featuring a variety of gummy candies. The way the “bucket” is framed in the ad, it does look pretty big. But when Hope finally received the candy, she says the container looked more like a frozen yogurt cup.

“I could have gotten this amount of candy from the dollar store for two dollars,” she says.

Other TikTokers have posted similar videos, stating that they thought they would be getting the advertised bucket, but they received something much smaller that was often half-filled.

There also seems to be some confusion about weight and sizing. Another TikToker went through the Candy Planet website terms of service, showing the fine print that appears to absolve the brand of having to do returns or sell what they’re actually advertising. The Candy Planet TikTok account is gone as of Friday morning, but the website is still live and advertising a “jumbo bucket.” The Daily Dot reached out to Candy Planet for comment via email.

In another video, Hope says the candy was just “mediocre” and definitely not worth $50. The Daily Dot reached out to Hope for comment via email.