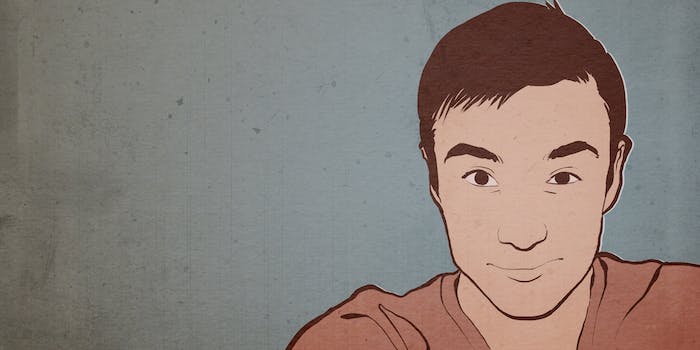 YouTuber Calum McSwiggan says he did not fake attack, despite police claims

'I did not think...that I would be treated as a criminal.'

What really happened outside West Hollywood gay bar the Abbey on Sunday?

It’s a question dominating social media as the LGBT community argues about the story of an alleged attack that left gay YouTube star Calum McSwiggan in the hospital that night—an attack that West Hollywood police denied ever occurred.

Over the weekend, McSwiggan claimed he had been the victim of a hate crime, suffering broken teeth and six stitches to his head outside the Abbey after VidCon. But Tuesday, the West Hollywood Sheriff’s Department issued a statement that McSwiggan was brought into custody after vandalizing a car, and that he had arrived without injuries, instead beating himself in a jail cell. The department also shared a booking photo with the Daily Dot, which appeared to show McSwiggan without injuries to the face.

The Los Angeles County Sheriff’s Department has an affirmative duty to fully investigate all assaults and reports of violence in our community. Deputies from West Hollywood Station responded to and investigated the report by Calum McSwiggan that he was assaulted by three males after leaving a local nightclub early Monday morning.  Responding deputies were unable to substantiate the assault.

As a result, the story of a young YouTuber who was gay-bashed after leaving VidCon became the story of a disturbed individual who faked his own beating to get attention. But it’s possible that neither of those narratives leads to the truth.

On Wednesday, Calum McSwiggan posted a detailed version of events on his Facebook page, shortly after his friend and fellow YouTuber Melanie Murphy did the same. Both accounts contradict what West Hollywood police claimed in an unusually open statement about a case that verged on a smear campaign against McSwiggan.

In the detailed post, McSwiggan described a fun, drunken celebration that went horribly wrong after he left the bar with a man he didn’t know well. He also admitted to damaging the attacker’s car and injuring himself in jail—but only after, he says, he was beaten and in a state of shock.

Murphy’s post matched McSwiggan’s—though it was told from the point of view of someone who did not witness the violent incident, but did see the aftermath and the behavior of the police.

While McSwiggan’s friends backed up his story, one commenter on Facebook claimed that he was there too, and that McSwiggan’s and Murphy’s accounts were inaccurate.

According to Damien Nichols, who identified himself as the man McSwiggan left with, there was no physical violence during the incident—just some incoherent yelling on McSwiggan’s part.

“He decided to pick on my one straight friend, who was sitting in the car, while Calum was at the door in his face yelling at him, they were like verbally yelling at each other,” wrote Nichols in a comment on Murphy’s post. “It was rather annoying, but NOT VIOLENT.”

Details of the case are still emerging, and the Daily Dot reached out to McSwiggan to request the name of his attorney for a statement. According to McSwiggan, he arrived in court on Wednesday morning to find that there was no record of his case. He told the Daily Dot via Twitter that he requested a public defender but has yet to be assigned one.

Regardless of contrasting tales, McSwiggan has become the target of constant personal attacks on social media in the 24 hours since police discredited his story. On Facebook and Twitter, posts directed at the YouTuber have used slurs and suggested that he should be physically attacked.

McSwiggan responded to the vitriolic messages by doubling down on his story and emphasizing the hurt caused by claims that he faked a gay-bashing.

“Many people are trying to discredit my story but this is the full and entire truth,” wrote McSwiggan on Facebook. “Being accused of being a liar and being called a disgrace to the LGBT+ community, a community I’ve dedicated my life to, is more painful than any hate crime could ever be.”