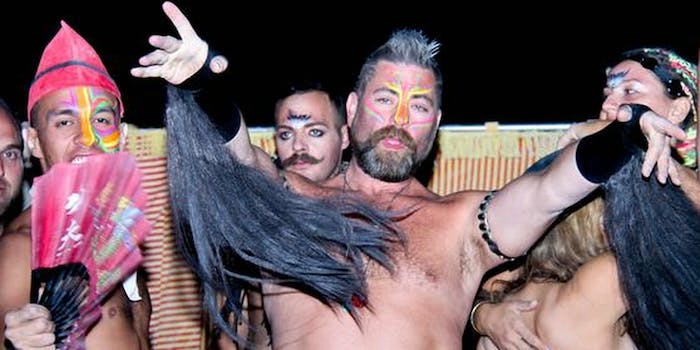 There's a market for tie-dye velvet bodysuits that you didn't know existed.

If summer hasn’t occasioned a reason to wear that electric yellow body paint, fear not. The Burning Man festival begins this Sunday, Aug. 30, and as Burners will tell you, anything goes.

Burning Man creates a week-long, temporary city in the Black Rock Desert of Nevada with a collective focus on performance, community, and creativity. With a heavy emphasis on self-expression (and glow sticks), attendees embrace colorful fashion as part of their overall experience. The festival features an annual art theme—this year it is “Carnival of Mirrors”—that Burners may or may not use as inspiration.

Andie Grace was the Communications Manager and Regional Network Manager for Burning Man for 13 years. Although there are recommendations for festival-goers on what to pack, Grace wrote in an email to the Daily Dot that the dress code for Burning Man is really no dress code at all. She wrote:

“All the day to day information we get from what others wear—labels, brands, social cues about status or profession, and so on—gets tossed into a bin for the week and instead all are invited to play, to have fun, and to wear whatever they want, even if it’s just a smile and tablecloth.

With “self-expression…expected as a condition of participation,” as Grace put it, a shopping trip to the local mall to shop ‘festival style’ at Forever 21 isn’t going to cut it. One place where Burners find apparel that resonates is Etsy.com. In the months leading up to Burning Man every year, festival-goers plan for their costumes as much as they plan their travel arrangements—and sellers who specialize in Burning Man gear are ready to make the sale.

Lyndsey Merryman runs NeonNancy, “the #1 light-up bra and party clothing designer,” according to her shop. Some of her pieces—such as light-up bras, fur coats, and vests—started out as custom pieces for herself and friends for Burning Man. Other pieces were inspired by the culture of the festival itself.

“Burning Man’s culture promotes radical self-expression, which in turn germinates extreme creative freedom,” she wrote in an email. “As a designer, I am so grateful for an event with such principles and the experience it creates.”

Merryman has been to Burning Man several times and sees a stark contrast between it and other annual festivals, like Bonnaroo or Electric Forest which otherwise might seem similar (lots of music, art, celebs and short shorts). “At Burning Man, everyone is a part of the show, not just another attendee,” she wrote.

How these Etsy sellers reach their target audience of Burners is a combination of things, of course, but for starters, the keywords “Burning Man” help. A quick search on Etsy for “Burning Man” turns up all kinds of outrageous designs including LED fur coats, glittery men’s jeggings, and steampunk goggles designed for withstanding the Playa dust.

Jayni Devol, the owner of Lovechild Boudoir, told the Dot in an email that she didn’t used to use the keywords “Burning Man” on Etsy, but has been receiving an influx of messages about Burning Man fashion in particular over the last couple of years. That has prompted her to start using the search term to hawk her feather epaulettes and gothic glamour bralettes. While she targets people who attend all types of festivals, it’s easy to see why Burning Man attendees might find her products attractive.

Some Etsy sellers become known for garments popular with Burners, even if that was not their original intention. Fashion designer Michelle Uberreste, for example, said that she has tried to broaden the scope of her audience by creating more approachable pieces, like shirts and skirts that could be styled for everyday life. Yet it’s Burners who specifically who keep coming back to her shop. “I have found that a lot of Burners appreciate my vision and creativity more than other markets,” she wrote in an email.

Uberreste’s Aether bodysuit is a gray tie-dye garment that is made with a stretchy velvet fabric and accented with a giant hood. One can easily imagine that a bodysuit like this would keep a person cool in the desert heat during the day and that the oversized hood would help to protect the face from the dust.

Speaking of the dust, Tina Ambrosini runs Moxie and Mojo Fashion on Etsy and elaborate goggles are her specialty. She started making goggles for Burning Man specifically this past year, she told the Dot in an email. Ambrosini held a “spiritual commitment” ceremony at Burning Man with her fiancé last summer and wasn’t able to find any goggles to go with her “Playa Wedding” ensemble. A niche product was born.

As a designer, Ambrosini wrote in an email that is most inspired by Burners’ dedication: “The fact that people want to be there badly enough to not only withstand the often harsh elements of the Playa, but that they are excited to do so.”

From bodysuits to spiritual commitment ceremony-appropriate goggles, people who would never wear costumes at any other time of year do so when they’re at Burning Man. And in a world where fashion is often what separates people by class and interest, it’s refreshing to hear that Burning Man puts that all on pause.

Photo via dvsross/Wikimedia Commons (CC by 2.0)