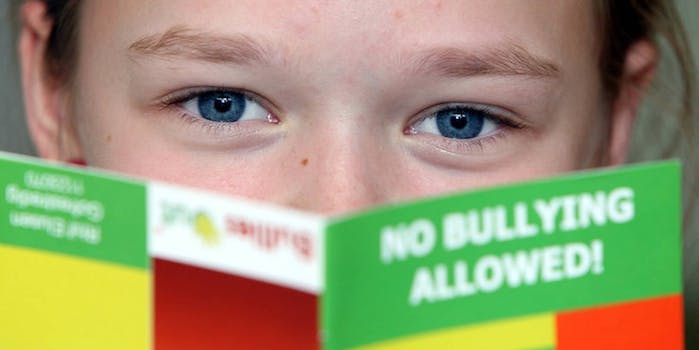 Up to 15 percent of kids say they've been bullied online.

Cyberbullying affects 7–15 percent of youth, with estimates even higher for LGBT young people and those with disabilities, according to a new report from the National Academies of Sciences, Engineering, and Medicine. The study calls bullying a serious public health problem, with serious long-term and psychological consequences for both victims and perpetrators.

One of the report’s committee members, Catherine P. Bradshaw, professor and associate dean for Research and Faculty Development at the Curry School of Education, told the Daily Dot that while rates of bullying seem to be flatlining, the Internet and social media make it so that one incidence of bullying can have huge consequences. “All it takes is just one comment or one picture, which can be shared thousands of times and can completely alter a student’s life,” she says.

In early May, a picture of a special needs student at Minnetonka High School in Minnesota went viral in his school after another student shared it on social media. The picture was a full-body shot of the student using a urinal. In that case, other students reported the incident, but not before it had been widely shared.

“All it takes is just one comment or one picture, which can be shared thousands of times and can completely alter a student’s life,” says a bullying researcher.

Other incidents have ended in great tragedy. In April, 14-year-old Destiny Gleason was found dead in her bedroom. Her mother says she committed suicide after reading mean Facebook posts about her.

Bradshaw notes, that while stories like Gleason’s are not the norm, bullying culture is pervasive and is sadly seen as a “rite of passage into adulthood.”

“This attitude,” Bradshaw explains, “means bullying often goes unchecked by parents and administrators.” While most adults are against the bullying of children, Bradshaw notes that parents and schools often encourage bullying behaviors by making the victim feel responsible.

“The idea that ‘well, if you weren’t so overweight, no one would pick on you’ or ‘if you hadn’t taken that picture, it wouldn’t be shared online’ is pervasive and very damaging,” she explained.

Parenting and youth development expert Dr. Deborah Gilboa agrees, telling the Daily Dot, “parents often unintentionally reinforce bullying culture by the way we talk about other people, the way we talk about our children’s friends, and the way we talk to our kids about the dangers they face at school.” Gilboa uses the example of a parent warning a child not to wear a certain outfit because other kids might make fun of them. “Saying, ‘Well, kids will make fun of you if you wear socks with sandals’ sends a subtle message that the kid deserves the derision.”

Even bullying over what might be perceived as something small, like clothes or a hairstyle, Bradshaw says, can have “far-reaching psychological implications for children and continue into problematic behavior as adults.” The report links being a victim of bullying to depression, anxiety, and alcohol abuse even into adulthood. And bullies themselves are at an increased risk of depression and often engage in theft and vandalism.

Bradshaw notes that while the report suggests policy changes may curb bullying—such as adopting laws and policies that clearly define bullying and cyberbullying—change has to come on an individual level, with parents being willing to discuss bullying with their children. “Parents need to teach their kids how to be assertive in standing up to bullying behavior when they see it without being retaliative,” which, Bradshaw adds, “is a hard line for even parents to discern sometimes.”