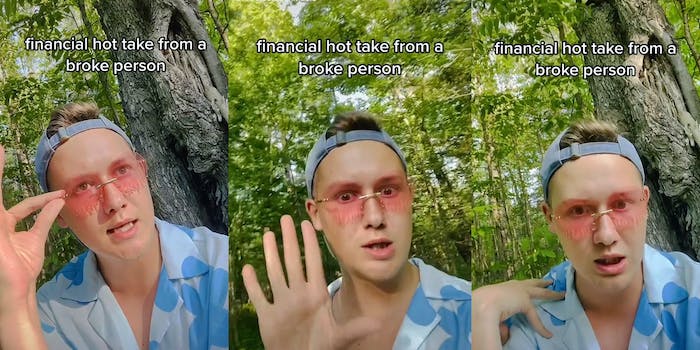 'The coffee isn’t what got you here, and it won’t get you out of it.'

A self-admitted “broke” TikToker has some advice for fellow broke people: treat yourself.

In a now-viral video, TikTok user Robbie (@robbiesmoonmusic) shares that, for the first time in his life, he is broke and had to move back home. However, he says that it was not little luxuries that made him broke—and consequently, removing these minor spending sprees will not put him in the black once again.

“These little purchases that you make on a daily or weekly basis that bring you joy? They are harmless,” he says. “I would even go so far to say they are necessary, and they are not what is making you broke.”

At the beginning of the video, Robbie says he now has no car and no job. However, he says that becoming broke was not due “little purchases,” but instead, larger errors in budgeting.

He claims that his current financial woes come from living “in an apartment that was way too expensive” and neglecting to get his car’s oil changed, which led to further issues.

The actual costs weighing down his life, he says, come from payments on his car loan, car insurance, medical co-pays, groceries, and student loans. He also adds that when he did have a car, he spent a considerable amount of money on gas.

“So you know what? Get your nails done when you want them done. Get your hair done when you want it done. Buy that drink you’ve been craving. Get yourself that ice cream cone or that delicious looking croissant at the bakery,” he concludes. “Do not deprive yourself of the things that are going to bring you temporary joy thinking that that’s going to bring you long-term financial stability because it won’t.”

In comments, users thanked Robbie for freeing them of the guilt following their minor purchases.

“Honestly needed to hear this so bad,” one user wrote. “I’ve been guilt-tripping myself for years that ordering sushi once a week is why I’m broke.”

“Thank you so very much for this message!!” another echoed. “It’s not Starbucks that’s making us broke, it’s these damn inflated prices for life’s necessities!”

“The three biggest costs that actually make a difference: housing, transportation, and food,” a further user argued. “A coffee isn’t the reason why people are struggling!”

Others shared their own stories of embracing small purchases.

“It took me MONTHS to ‘let’ myself get a $10/month gym membership because I was so fixated on living as cheaply as possible,” one user recalled. “Finally just got one and I’m instantly 10x happier and feeling healthier!”

“Using a budgeting app blew my mind. 90% of my stress and guilt came from fun little buys. 90% of my spending was rent, food, necessities,” a second user claimed.

In the comments, Robbie also clarified his statements.

“Y’all, obviously be wise with your money. Budget, live below your means. Most of us aren’t making tiny spends on treats all 365 days of the year,” he wrote. “The point I’m trying to make is that the little ‘treat yourself’ harmless spending is the first to go when we’re low on money when, in reality, we’re struggling so much with money because our rent is way too high, we don’t make enough, and we take on too many bills.”

“Prioritize fixing the foundation. Sign a less expensive lease, pay off loans faster,” he continued. “The coffee isn’t what got you here, and it won’t get you out of it.”

Update 2:02pm CT, June 27: When reached for comment, Robbie told the Daily Dot he’s watched videos by “self-proclaimed millionaires giving tips on how to ‘become rich’ and almost every single one mentions ‘no longer spending money on Starbucks and other minor expenses’ as a viable way to fix a poor financial situation,” calling it “classist and victim-blaming.”

“They all fail to mention the role that generational wealth and socioeconomic status plays in the success of many million/billionaires. Skyrocketing rent prices, insurance costs, exploitative gas prices, and a myriad of other bills are what is killing most of us right now. Obviously, those much larger expenses will be what provides the most relief,” he said.

“People shouldn’t feel that they can’t enjoy the simply pleasures of this late capitalist dystopia just because they’re not the mega-rich,” he continued. “If it’s not going to throw you into an overdraft or keep you from making your rent payment this month, treat yourself! Sometimes, these frivolous expenses are all that keeps us pushing through this mundane 9-5 life.”