What they see as 'camouflage,' many others are calling overt racism.

Often when an instance of “blackface on social media” makes the news, it involves a college student or a Snapchat filter. Today, however, it’s over the British Army.

Around 10am UTC today, the army tweeted a photo of a soldier in blackface with the caption, “Being a #soldier in the jungle requires a robust sense of humour.” 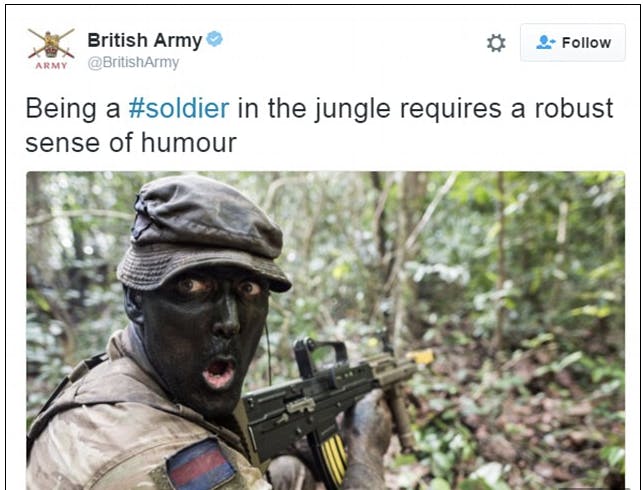 Since there’s nothing else really happening in the photo aside from blackface, we’re not sure what’s so funny about the long legacy of mocking black people and perpetuating harmful, centuries-old stereotypes. But I guess the Ministry of Defense had a change of heart too and quickly deleted the tweet after people said they were offended.

“The content of the Tweet shows a picture of a soldier wearing camouflage and concealment measures, standard for jungle training in Belize,” an army spokesperson said, according to the Daily Mail. “We can see how the tweet may have been misinterpreted, have immediately removed it and apologise for any offence it may have caused.”

Of course, there are those calling the whole thing uptight, social justice rubbish.

Then there are others who have shattered the “it’s camouflage, calm down” theory.

.@BritishArmy Blackface, light jacket = ineffective camouflage. Unless you're trying to pass unnoticed among a cabal of, say, armed racists.