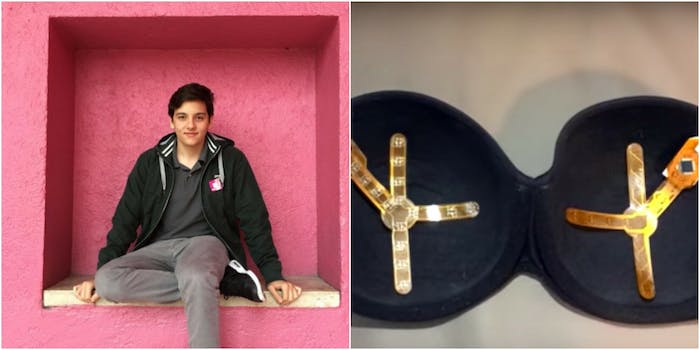 The project is personal to him.

An 18-year-old male may be the first to develop a bra that can detect breast cancer.

Julián Ríos Cantú from Mexico, along with three of his friends, took home the top prize at the Global Student Entrepreneur Awards this week, winning $20,000 to develop the Eva bra from its current prototype stage.

The Eva works via biosensors that detect changes in breast temperature and texture, since cancerous tumors increase blood flow and therefore skin temps. The sensors are connected to an app, which would log any changes over time. Women would need to wear the bra for at least 60-90 minutes once a week.

Since the bra is in such early stages of development, Anna Perman from Cancer Research U.K. told the BBC it’s unclear if it will really work. “At present, there is no evidence to show whether this bra is a reliable way to detect tumours, and it’s certainly not a good idea for women to use technology that hasn’t been tested in good-quality scientific trials.

“It’s great to see young people like Julian getting into science and having ideas that could help with cancer diagnosis. But an important part of science is rigorous testing, to make sure innovations like this actually benefit patients.”

The project is dear to Ríos Cantú, as his mom almost died of undetected breast cancer when he was 13. At one appointment, the doctor told her that her lumps were malignant, but six months later, another mammogram found they were cancerous.

“The tumor went from having the dimensions of a grain of rice to that of a golf ball in less than six months,” Ríos Cantú says in a video for his company, Higia Tech. “The diagnosis came too late, and my mother lost both of her breasts and, almost, her life.”

Not long after, Ríos Cantú began researching the illness and developing the idea with his friends. He hopes it will be ready to market within the next two years.