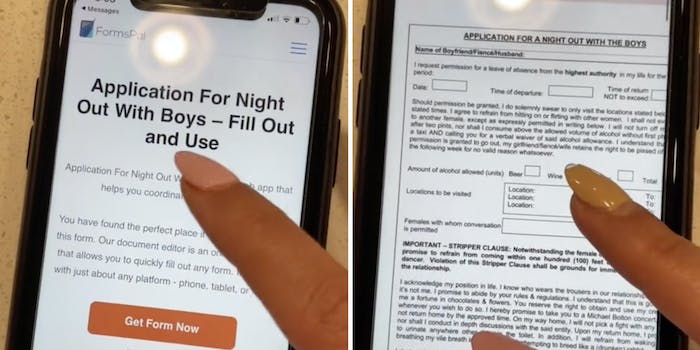 ‘He took it to the extra mile’: Girlfriend signs permission slip for boys’ night out, sparking debate

'I agree to refrain from hitting on or flirting with other women.'

In a viral TikTok, a guy organizing a “night out with the boys” created a permission slip form for their partners to approve.

Taleen Davidian (@talgonza) posted the TikTok on May 5. In the clip, she says, “Someone tell me why this man is sending a text message to his friends all like, ‘Oh let’s go to a concert, blah, blah, blah and then he’s like sending them this link right?”

She opens up a phone and shows a group text message, which reads: “What’s up guys, trying to plan a boys trip to an Alejandro Fernandez concert. Date is September 10th (sat) starts at 8pm. Location: Ontario, We can stay somewhere close that night. Tickets are $100-120. Trying to see who would be down.”

The guy also sent a link to a form called “Application for Night Out With Boys – Fill Out and Use.”

The top of the form reads: “I request permission for a leave of absence from the highest authority in my life for the following period.”

Davidian zooms in on the permission slip, which includes things such as: “I agree to refrain from hitting on or flirting with other women” and a “stripper clause” that says the guy will not go within “one hundred (100) feet of a stripper or exotic dancer.”

“Signed the permission slip,” she wrote in the caption.

In the comments, it seems like Davidian’s partner is the one who made the form. “It took him 45 minutes to send this text and I just had to check why LOL,” she wrote.

“It’s the only way I can get my boys out of their bird cage,” commented @adrianggonza, who appears to be Davidian’s partner.

Commenters found the form to be funny. “LMAOOOO. At least he is organized !”

“He took it to the extra mile,” another person commented.

“That’s actually so cute,” wrote another.

The Daily Dot has reached out to Davidian via email.