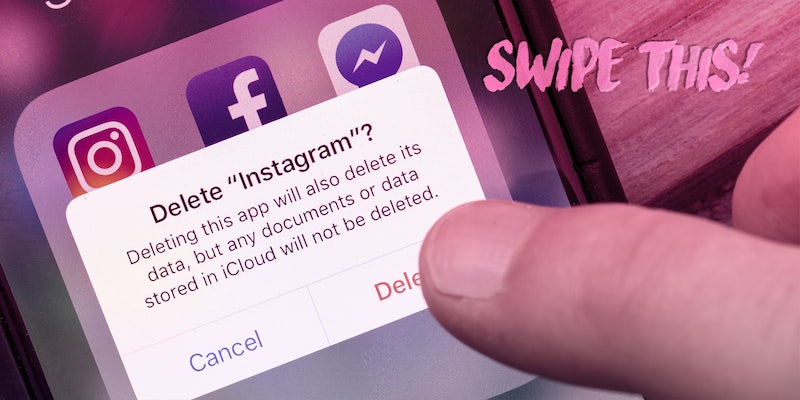 Swipe This! My boyfriend wants me to delete my Instagram

It's time to put the phone down and rest.

Swipe This! is an advice column about how to navigate human relationships and connections in an age when we depend so heavily on technology. Have a question? Email [email protected].

I recently got invited to a charity gala. My friends and I got dressed up, and we took pics. I posted them on Instagram. One of my followers commented “wife material.” My long distance boyfriend totally lost it and said I am looking for attention. He demanded to know why I follow this guy, who he is, and why I keep posting sexy selfies.

Later, my boyfriend admitted he is the issue. He said he had the same conflict with his ex, and he thought he had changed. He then decided to deactivate his Instagram because he said it will damage our relationship if he keeps seeing selfies and random guys commenting.

I felt sad. I also felt he was threatening me. We’ve already gone through so much, and I feel so tired…

We started dating in 2019, but then he got a job offer overseas. We immediately admitted it wouldn’t work, but we reconnected a couple months after and decided to give it a try. It wasn’t easy; we fought a lot, and we hardly reconciled our conflicts. Six months later, we called it off.

Then, on Christmas Day, I got a call from him, and he said he wanted to speak to me in person. He flew to my city, and when we met up, it felt like I was in a movie. We sat on the beach, and he had tears in his eyes, promising me the world. He said he wanted me back, he loves me, and he can’t imagine a life without me. I agreed but said we needed to work on our issues. He said he was willing to do anything.

Two months later, I visited him overseas, and he showed me where he lives and works. I then picked up on his patterns of partying and drinking. I confronted him, and he said that’s him and if he wants to go out exploring, nothing or nobody will stop him because he worked hard to be where he is. Nobody can control him. I felt really bad and I was like, “OK, maybe this guy isn’t ready to commit the way I am…”

A couple months later, he paid for his parents to visit him. They stayed for two weeks, and during that time, we hardly spoke. Normally, we called everyday, but he failed to communicate. I was angry, and we argued. He said his parents are his earthly Gods, and nobody comes first before them—and he shouldn’t feel guilty for showing them a good time.

Since then, we had the Instagram argument, and I feel like I’m slowly losing the plot. I keep thinking back to that moment on the beach when he promised me the world. I truly love him, but an understanding heart gets tired, too.

What should I do?

You’re tired—you say so repeatedly in your letter. So the first thing I would suggest you do is rest.

Just rest. No analyzing. No planning. No negotiating with your boyfriend about who should delete Instagram. Rest.

I have a feeling your next steps will come to you when your mind and heart go quiet.

I have to confess—as a fellow worrier and chronic overthinker—I know taking this advice won’t be easy. Exhausting as it is, spinning your wheels can be a very appealing pastime. In fact, racing around our own minds is downright addictive. We probably indulge in it because at some point we learned that this was how we could have control. But all we have is the illusion of control.

In reality, overthinking your way to a solution is much like perusing the bottomless scroll of Instagram or TikTok—looking for that next dopamine hit and always coming up empty. If you’ve ever climbed your way out of a scroll hole, you know that true relief comes when you put the phone down. So please give yourself permission to rest. Your tired heart will thank you.

Your heart might also tell you some unpleasant truths. When we rest, we let go of control. We surrender. We let things unfold. Also, if we’re patient, a piece of us that has been all tied up in knots can finally breathe and feel free again.

Maybe there will be pain, but also you might find other feelings like freedom and relief. Perhaps you’ll finally feel free to choose how to move forward on your own terms—with or without the dude who promised you the world on a beach.

I can’t know your boyfriend the way you can, but he strikes me as someone who likes to have control. He can’t stand that you have interactions on Instagram. But he can’t trust himself to learn from his past mistakes, so what does he do? He sets up an all-or-nothing approach that he’s hoping will give him complete control. He doesn’t want to do the work of facing his own emotions and thoughts head-on. So he looks for a shortcut that will solve everything and put him back in a position of control.

You also mentioned his “patterns” of partying and drinking. He said he worked so hard to be where he is, which probably involved a ton of control. I’m sure there are many times where he feels controlled by work or by his boss. You bringing up your concerns, I’m sure, is just something he perceived as yet another force trying to control him.

Which brings me to his God-like parents. I’m all for loving and respecting the folks who raised you. But God status? That sounds pretty extreme to me. I’m sure your boyfriend has good reasons for loving and wanting to prioritize his parents, but it seems to me something painful is just below the surface of that relationship. I can’t imagine a household run by two Gods as an easy place to grow up.

Which brings me to your beautiful moment on the beach—the movie moment that roped you back in. You know what movies have that real life doesn’t? A director. Maybe you felt like you were in a movie, not because it was magic, but because someone was directing that scene to go exactly as he planned it. I’m not saying his words or his feelings were inauthentic. He may very well have meant every single word. What I am suggesting is that he may have also wanted very badly to be in control when he promised you the world.

Grandiose gestures can make people feel big and powerful. Frankly, they don’t impress me much. I’m curious about moments when your boyfriend has been humble. Has he ever on an ordinary day, without a cinematic backdrop, taken stock of smaller moments and how they affected you? When has he been patient? When has he listened to you? When has he shown you—through his actions and not just his words—that you’ve been heard?

Obviously, I do not think you should delete your Instagram. Nor do I think your boyfriend should delete his. I don’t think any solutions or improvements will come from all-or-nothing tactics.

I also don’t think you’ll sort this out by extending more compassion to your boyfriend. Trying to understand how or why someone behaves in upsetting ways, in my experience, doesn’t change their behavior.

I think you should rest, for however long you need to. Be patient with yourself. And then, when you’re ready, have an honest chat with your very understanding heart about what she needs from you next. She’ll tell you what to do.