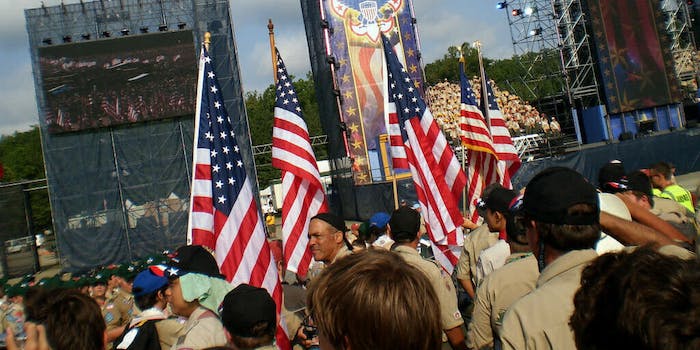 Letting girls join will only better the organization.

Yesterday, it was announced that the word “boy” will be dropped from “Boy Scouts,” opening the door for girls to comfortably participate in the program. As a former Boy Scout, I couldn’t be happier.

However, not everyone felt the same. As news of the new name got out, the usual roster of right-wing pundits took to Twitter to decry the change.

I am a proud Eagle Scout

Let the tragic self-destruction of the Boy Scouts be a lesson to us all. Begin surrendering to the Left, and they will not be satisfied until you are completely obliterated.

Yet another institution has come under siege by Political Correctness.

Liberalism is slowly decaying everything that was once good in our society.#maga #BoyScouts

The conservative blogosphere makes it seem as though every Boy Scout is clutching their faded kerchief at the idea of girls being allowed to join the Scouts. Not only do I think this change will improve the childhoods of the girls who are being integrated, but I also think that this integration will improve the organization itself.

I was in Scouts from ages 6 to 15. It instilled in me a love for national parks and community service. I still know how to tie a knot, bait a hook, and chop down a tree. But this was not the experience of both of my sisters who were in Girl Scouts.

I distinctly remember the moment when my parents had had enough. While I was given a Swiss Army Knife pretty much as soon as I walked into Cub Scouts, my sisters were not allowed to have real knives or axes. This came to a head when instead of learning to start a fire with, you know, fire, the girls were instructed to use candy to simulate what a fire might look like. Not exactly instilling of confidence, or training for a “leader” in the wilderness or otherwise. This is not meant to besmirch those Girl Scout leaders who went above and beyond to give their troop a taste of the outdoors, but my sisters’ experiences were not unique.

While there were many great aspects of the Boy Scouts, there were also aspects that felt antiquated and got in the way of all that great stuff. There was a weird Cold War-era mix of nationalism, religious fervor, and chauvinism that was baked into the Boy Scouts as I experienced them. Which is why it’s humorous when right-wing bloggers say adding girls will “decay” or “destruct” the Scouts; in reality, it will hopefully reverse some of the backward thinking that has soured the institution.

The Scouts have, in fact, always been political, and to understand the nationalistic, colonial attitude that still persists in the Boy Scouts, you have to go back to the group’s founding. Those who defend the Scouts as a distinctly American experience have surely forgotten that the organization was started by an Englishman. Lord Robert Baden-Powell was born during the height of the British Empire, and whatever biases you assume from the title “lord” are correct. He was racist, imagined the scouts as a way of stimulating militaristic nationalism, and even Christopher Hitchens has conceded that the man was “mildly fascist.”

As has been well-documented in the media, the nagging shortcomings of the group’s founder have persisted in the organization, even when I was a scout in the ‘90s (take, for instance, the 1991 memo “Atheism, Girls, and Homosexuality” that preserved the Scouts as a trojan horse of conservative propaganda) and they continue today. If the Boy Scouts’ website is accurate, being “reverent” is still a requirement of the Scout Law. The Scout’s Oath still asks young scouts to keep themselves “morally straight.”

I remember vividly when I decided to quit the Boy Scouts. Part of it was because I was spending too much time on other activities like theater and thinking about talking to girls. But part of it was, that in the midst of all this rigid masculinity, I was wearing the tight shorts and neckerchief of a British Empire dandy. It was embarrassing. With my peers wearing Carhartt Jackets, JNCO Jeans, and stealing their dad’s chewing tobacco, my participation in Scouts ended partially because of the narrow conception of manhood that Scouts helped to instill in me.

As a heterosexual white guy from rural Pennsylvania, I was obviously not the wokest teenager, and buying into such rigid gender norms is not something I am proud of today. And yet there were things that gave me pause even back then. Like, why does the troop have a (necessarily mainline Protestant) Chaplin? Why is there so much focus on the proper folding of the American flag? Any former scout will tell you that their least favorite part of their time in the organization was the paramilitary exercises of uniform and bunk inspections and compulsory salutes toward the flagpole. These reactionary relics turned me, and I would wager, a lot of other boys, off of the program.

In the coming days, you will see op-eds claiming that Boy Scouts shouldn’t “become political.” The truth is that in adding girls to the fold, the Scouts has a chance to become less political. There is a way to have the “Citizenship in the Community” merit badge without preaching nationalism. The “Rifle Shooting” merit badge can exist without implicit support for the Republican Party and the NRA. And of course, the “Orienteering” badge can continue without prejudice regarding a scout’s sexual orientation.

Very little has to change about scouting as girls are allowed to in. The reason they are joining is to have the same experiences that have been afforded to the boys. The experiences they are seeking are a connection with the outdoors and the community, not paramilitary exercises. The changes that will be made have been a long time coming and the pieces of scouting we are leaving behind are vestiges of an era that kids today would rather keep in the history books. I suspect that contrary to the beliefs of Mike Huckabee, this change will lead to increased interest in scouting and is probably the only way to save Scouts from extinction.

Besides, Trail’s End popcorn is probably the least popular fundraising item a kid has ever been forced to sell, so maybe we can work out a deal where boys can sell Girl Scout cookies, too. Then the free market will win, which should make at least a few of the conservative bloggers happy.