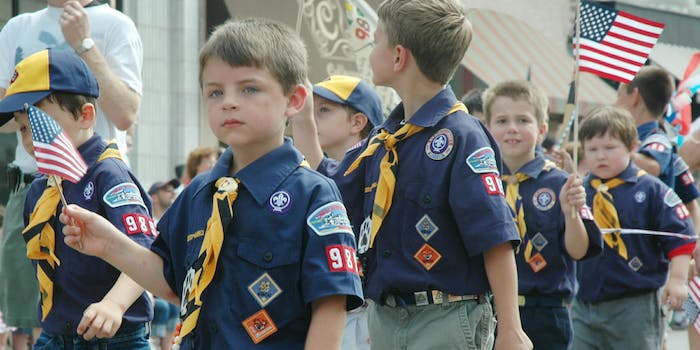 The organization's inclusion of girls has some people behaving like children.

The Boy Scouts won’t be just for boys any longer, the organization announced last year, and on Wednesday, it unveiled its new name: Scouts BSA. But some conservative men fear that the taking the “boy” out of “scouts” and allowing girls to join is just another “war on masculinity.”

“We wanted to land on something that evokes the past but also conveys the inclusive nature of the program going forward,” Chief Scout Executive Mike Surbaugh told the Associated Press. “We’re trying to find the right way to say we’re here for both young men and young women.”

Boy Scouts of America launches historic ‘Scout Me In’ campaign and unveils the new name for its iconic program for older boys and girls. #ScoutMeIn https://t.co/a0qmZz2BXd

Scouts BSA will begin accepting young women next year, with teen boys and girls vying for the same merit badges. However, “units” will still remain divided based on gender. The move is partly to assure young women joining Scouts BSA can also become leaders within the organization, instead of suffering from a potential gender gap from young men taking charge of their troop.

With this shift toward equality, conservative men aren’t exactly happy. This is partly because girls are yucky, gross, and have cooties.

The war on masculinity has claimed another victim. The Boy Scouts are dead after 108 years because they believe men are evil and manhood is a mental disorder. #ScoutsBSA.

I am a proud Eagle Scout

Let the tragic self-destruction of the Boy Scouts be a lesson to us all. Begin surrendering to the Left, and they will not be satisfied until you are completely obliterated.

There's something deeply sad about a society that presses for the Boy Scouts to stop being the Boy Scouts. And there is something hilarious about the Girl Scouts now complaining that the no-longer Boy Scouts will accept girls. https://t.co/vbtcxGhcBJ

The Boy Scouts have dropped the word "Boy" from their name.

Plenty of grown men on the internet seem to think “political correctness” is to blame. In reality, the Boy Scouts of America is losing members and it needs to bring in young girls to keep the program afloat.

But no, clearly feminism is what’s ruining the Boy Scouts.

The war on boys and men continue!

It looks like we have reached the end of the road with the Boy Scouts.

The organization has decided to drop “boys” from its name.

The war on masculinity continues. There are no places for boys or men to escape the scourge called feminism.

Question. If girls can join the Boy Scouts, why can’t Boys join the Girl Scouts? This is going too far.

Lol girls already have girl scouts. PC culture dictates that boy's can't have anything to themselves because you know… That would be "sexist" Lefty's ruin everything with their corrosive touch.

Feminists and their allies, meanwhile, are getting a kick out of the conservative angst.

According to conservatives us "liberal feminazis" are weak, pathetic snowflakes always drowning in our victim tears *and* a powerful, relentless force that can make a massive organization like the Boy Scouts change their name.

I remember joining the Boy Scouts and at the first meeting they announced that we'd be required to go camping every month.

I never went back.

Anyone who wants to live that nightmare life is welcome to it.

So today we learned that girls can join the Boy Scouts and grown ass men still think girls have cooties.

But if we take the word “boy” out of Boy Scouts, what’s next? Kids playing Zelda on their Game 3DS? The Pillsbury Dough? Cotting the NFL? And who the hell is back in town now? [slams hand on table] This is an outrage!

What kind of special snowflake cries over the Boy scouts changing their name to more accurately reflect their changing membership policies? Oh, right. Conservatives. The reigning champions in the victim olympics.

Conservatives: hahahaha stay triggered liberals
Also conservatives: hello police the Boy Scouts are changing their name this is a personal attack on my manhood

Former Girl Scouts stress that there are plenty of reasons why girls may want to join the Boy Scouts, too, including the fact that the Boy Scouts seemed to do cooler stuff, like hike and camp, instead of learning “etiquette.”

I joined the Girl Scouts because I wanted to go camping, learn how to make a fire with twigs, do all the outdoorsy stuff. Instead, I spent my afternoons learning how to stitch and practicing phone etiquette on PLASTIC PHONES. The Boy Scouts and Girl Scouts are not the same.

YES!!! I was really pissed off when I noticed how much more fun my older brother had in Boy Scouts – they camped in a cave on the side of a mountain in a fucking snow storm – where was my adventure?? To be fair, I think it’s all an option it just depends on your troop leader

I had an old Boy Scout manual that I got at a yard sale, and learned to tie knots, Morse code and identify clouds. This is me 1973 in regulation Girl Scout uni….the dress killed my spirit. pic.twitter.com/Fz7FNKycuy

In my experience (two daughters), the GSA program is a lot more interesting now than it used to be. A lot depends on the adult leaders though.

Conservatives seem to think that ushering girls into the Boy Scouts will destroy the basic fabric of American society by mucking up gender roles. But more likely than not, it just means that girls will be able to get some really cool merit badges alongside their brothers.