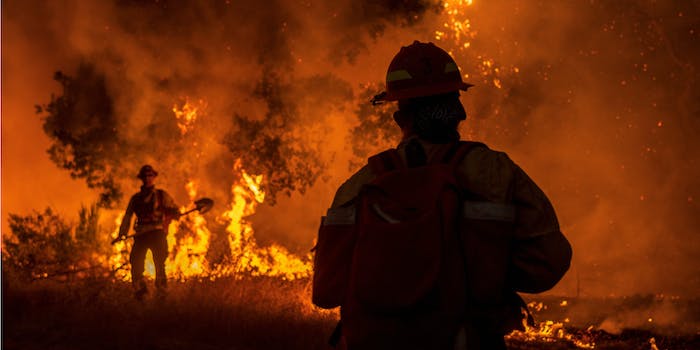 'I just want to go home and give my mom and dad a hug. All I know is I’m American.'

After becoming injured while fighting a major wildfire, a California inmate faces deportation to Laos, a country his family fled three decades ago, the Guardian reports. An online petition is calling for the man to be pardoned.

Bounchan Keola, 39, was released from state prison on Oct. 16, and officials immediately transferred him to U.S. Immigration and Customs Enforcement, according to MSN. In 2001, Keola was sentenced to 28 years in prison for second-degree attempted murder, voluntary manslaughter, and assault with a firearm, per MSN.

After serving his time, Keola said he just wants to go home. He also said he has never thought of himself as not American.

“I just want to go home and give my mom and dad a hug,” Keola said, per the Guardian. “All I know is I’m American. I’ve never thought of myself not being a citizen. I’m just asking for that one second chance.”

Keola left Laos when he was 4, but Gov. Gavin Newsom insisted on Keola’s deportation despite calls from congresswoman Rep. Alexandria Ocasio-Cortez (N.Y.) and others for Keola’s release, per the Guardian.

“He has no memory of Laos,” said Anoop Prasad, an Asian Law Caucus attorney representing Keola, per MSN. “If he is deported to Laos, I’m at a total loss as to what he would do.”

Others are advocating for Keola’s release and pardon through a Change.org petition that has nearly 1,600 signatures.

“With a stroke of his pen, Governor Newsom can pardon Boun preventing his deportation and allowing him to come home and continue working as a firefighter,” the petition website says. “Governor Newsom can also ensure that this does not happen again by ending his voluntary cooperation with ICE.”

Twitter users criticized Newsom for his silence on Keola’s case. One user called for Newsom to “pardon him now.”

Prasad quote tweeted Newsom and wrote, “STOP TURNING THEM OVER TO ICE.” Another user tweeted, “THE WHOLE SYSTEM IS ROTTEN.”

The California Department of Corrections and Rehabilitation did not immediately respond to the Daily Dot’s request for comment.