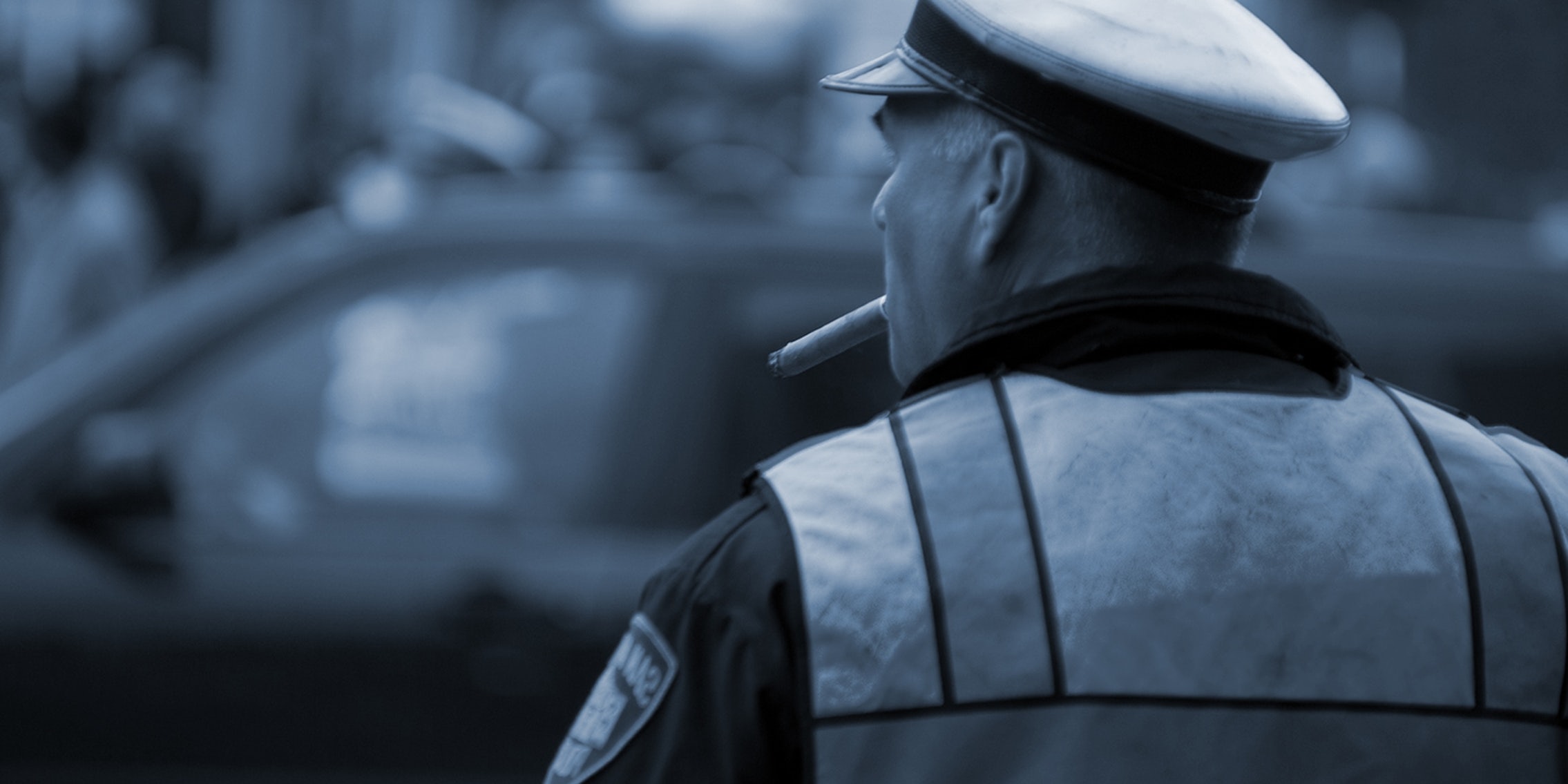 The rise of the pro-police #BlueLivesMatter movement

This is certainly one way to be pro-police.

After two New York police officers were murdered in Brooklyn on Saturday, the pro-police movement that has staunchly resisted calls to examine police brutality in recent weeks found itself in the perfect position to fight back.

The deaths of Michael Brown in Ferguson, Mo., and Eric Garner in New York City have led to massive nationwide protests and galvanized a new movement pushing for greater police accountability. Brown and Garner are among the most widely known victims of police violence, but poorly trained and poorly supervised officers have  wantonly killed unarmed black men in many other American cities in recent years. The events of the past few months were merely the catalyst for a loosely organized protest movement that recently united under the slogan “Black Lives Matter.”

For the people who have consistently given these mostly white police officers the benefit of the doubt, the moral high ground has been frustratingly elusive. That changed on Saturday, however, when the country paused to mourn the loss of officers Wenjian Liu and Rafael Ramos, who were brutally gunned down in Bedford-Stuyvesant, Brooklyn, while sitting in their patrol car.

Ismaaiyl Abdullah Brinsley, the 28-year-old who allegedly murdered the NYPD officers, committed suicide after shooting them. In an Instagram caption prior to the shooting, Brinsley alluded to the death of Garner, writing, “I’m Putting Wings On Pigs Today. They Take 1 Of Ours … Let’s Take 2 Of Theirs.”

In the aftermath of Liu and Ramos’ deaths, law enforcement’s most ardent defenders on Twitter started using the #BlueLivesMatter hashtag to counter the sentiments being advanced by the anti-police-brutality protesters. Embedded in the #BlueLivesMatter campaign is the narrative that the #BlackLivesMatter movement is denigrating and endangering police officers with its rhetoric, further deteriorating the public’s respect for the police.

#BlueLivesMatter has gained prominence in part because of several of its supporters’ arguments, which are indicative of the overt frustration felt by those who support police action.

Here, for example, is someone sympathetically sharing a Dec. 12 Facebook post (archived version available here) by a police officer publicly announcing his dereliction of duty.

Here is a tweet from someone living in what he calls “REAL America,” who suggested that the entire New York City police force abandon their posts on one of the city’s busiest nights.

Most of the people tweeting with the #BlueLivesMatter hashtag express seemingly contradictory political beliefs. They are fiercely conservative, yet unwaveringly loyal to the police, an iconic symbol of government authority. They believe that American law enforcement officers are unfairly criticized, and that protests in Ferguson and elsewhere receive unduly favorable media coverage due to a combination of liberal bias and political correctness.

These pro-law-enforcement activists have several core goals. To understand #BlueLivesMatter, it is essential to recognize their objectives.

Few words have seeped as deeply into the #BlueLivesMatter rhetoric as the word “respect.”

When Nick Mangold, a football player with the New York Jets, was spotted wearing a NYPD hat during Sunday’s game against the New England Patriots, the #BlueLivesMatter crowd turned him into an icon of their movement.

Utmost respect for @nickmangold for supporting our #NYPD #BlueLivesMatter pic.twitter.com/XWuttFToCp

The belief that police officers suffer from a respect deficit is not born out by the evidence. Gallup polling data from 2006 to 2014 shows that 57 percent of Americans have “a great deal” or “quite a lot” of confidence in the police. The racial divide on this question, however, is stark: 61 percent of whites express that sentiment while only 34 percent of African-Americans share it. Among African-Americans living in “highly urban areas,” Gallup found, only 26 percent said they had this level of confidence in the police.

Meanwhile, even though overall respect for the police remains high, neither blacks nor whites really expect the police to treat people of different races equally. In a November 2014 study by the Pew Research Center, 35 percent of whites said they had a great deal of confidence in equal treatment by police regardless of racism; only 17 percent of blacks said the same thing.

Widespread respect for the police already exists in the United States. So, too, does widespread recognition that police departments are tinged with racial biases. Unfortunately, the pro-law-enforcement crowd, which appears to be mostly white, largely ignores evidence that these biases manifest in consequential ways.

An end to anti-police-brutality protests

Many #BlueLivesMatter supporters have used the tragic and barbaric shooting of the two NYPD officers to suggest, both overtly and subtly, that the protests over the deaths of Brown, Garner, and other black victims were misguided, and that the real anger ought to be directed at cop-killers rather than killer cops.

Hey #fergurson protesters, protest the cop killers and other thugs that actually cause 99% of the murders #bluelivesmatter #blacklivesmatter

The anti-cop communists got what they wanted, dead cops. Who is gonna protest for the cops?? #BlueLivesMatter

The blood of 2 executed police officers is on the hands of Mayor de Blasio. May God bless their families and may they rest in peace.

It’s unsurprising, then, that many in the #BlueLivesMatter community are calling for the resignation of Mayor de Blasio.

A MoveOn.org petition calling for de Blasio’s resignation had roughly 60,000 signatures at press time. The petition concludes that de Blasio is “unfit to have a relationship with his police department for his remaining tenure and he should be taken out of office IMMEDIATELY.”

After Mayor de Blasio, the single biggest target of the #BlueLivesMatter crowd is Rev. Al Sharpton, who hosts the nightly MSNBC program PoliticsNation. Anger at Sharpton takes many forms, from calling him The Real Racist…

God bless and watch over all law enforcement in America. Shame on you Al Sharpton- #1racist in America! #BlueLivesMatter

…to suggesting that he empathize with fellow death-threat recipient Darren Wilson, who killed Brown…

…to bizarre accusations that he has himself committed murder.

At the core of the #BlueLivesMatter movement is the belief that the American Left is tearing the country apart and fomenting unrest. In the tweets of these aggrieved conservatives, police-violence critics have found glimmers of the backlash to the civil rights movement, when supporters of segregation seized on any violence or mayhem as an excuse to condemn civil rights demonstrators’ political goals.

#bluelivesmatter
Sharpton, Holder, the Obamas, the left–all own this murder of police.

Holder, Obama, Sharpton, De Blasio all culpable for this #BlueLivesMatter

As much as #BlueLivesMatter has latched onto the senseless killings of Officers Liu and Ramos, it’s far from certain that the two men would have endorsed the rhetoric that sprung up to supposedly honor them—though the movement’s supporters would likely say the same thing of Brown and Garner.

Photo via Corey Leopold/Flickr (CC BY 2.0) | Remix by Jason Reed